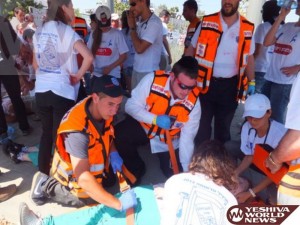 This morning outside of the Bayit V’Gan section of Jerusalem, flames and smoke belched from one the trains in the light rail system. Bloodied passengers stumbled off of the train as the more severely injured slumped to the ground or writhed in pain. Nearby medical students, ambulance crews and United Hatzalah medics tried to reach the scene but were prevented by police bomb disposal units. Once the threat of a secondary explosion targeting first responders was neutralized, fire crews were allowed in to put out the fires and render the scene safe. Only then were medical resources allowed to begin to triage, treat and evacuate the wounded. The heat from the staged fires merged with the heat of the blazing summer sun. Responders were hard pressed to focus on the complex injuries presented by the passengers. While this was only a training exercise, the realism and sense of urgency was palpable.

This annual event is the pre-eminent emergency medical mass casualty incident exercise and is the brainchild of Professor Avi Rivkind, Head of the General Surgery Department and the Trauma Unit of Hadassah University Hospital at Ein Kerem and United Hatzalah’s Medical Director. In the past the event had been held at Teddy Stadium and depicted a bus bombing, something responders in Israel have a great deal of experience. The light rail “explosion” had a similar feel to a bus bombing but the safety issues of the high-voltage wires, trains, traffic and pedestrians in close quarters provided a new set of challenges. The medical students were hard-pressed to apply their newly acquired medical knowledge but were pleased to work in concert with the United Hatzalah volunteers who unfortunately had much more field experience dealing with MCI terror attacks and road accidents. As a matter of fact, shortly after the training exercise United Hatzalah medics in Southern Israel responded to a MCI involving 2 buses and a private vehicle in an accident that left nearly 30 schoolchildren lightly hurt. The adaptation of another bus as a mass casualty transport vehicle was just another way that United Hatzalah medics improvise and utilize available resources when the situation requires.

Professor Rivkind commented that he was impressed with the level of inter-agency interaction despite the planned chaos that mimics real life. Eli Beer, Chief Coordinator of United Hatzalah had only praise for the poise of Professor Rivkind’s students and for the selflessness of the United Hatzalah volunteers who left their families, jobs or other activities to spend the morning in the hot sun honing their skills, preparing for an incident they hope never happens.