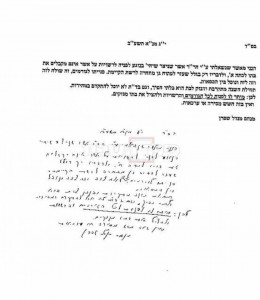 According to Elad resident Asher Schnitzer, his daughter, who is entering first grade this Elul, was not accepted to a Chinuch Atzmai school as she should be because Deputy Mayor Rav Yisrael Porush and his office manager Yishai Klein are taking revenge against him for “daring” to open a kindergarten that competes with Porush’s קן ציפור kindergarten system. Schnitzer insists the official response that there is no space in the first grade is simply not a reflection of the true situation.

Kikar Shabbat reports that some officials add that the registration request was after the deadline but Schnitzer responds, explaining he knows “for a fact” of other families that registered after he did and their children were accepted, rejecting the validity of that response.

As such, Schnitzer has turned to the state judicial system in the hope of adjudicating the matter in the coming days. Kikar Shabbat reports that Rav Porush and his assistant were unavailable for comment.