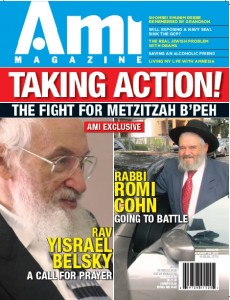 In an interview in this week’s Ami Magazine, Rav Yisrael Belsky, rosh yeshivah of Torah Vodaas had sharp words for the opponents of metzitzah b’peh, including Dr. Tom Frieden, formerly health commissioner of New York City and now head of the Centers for Disease Control.

““Where do these people come in and tell mohalim what to do? They don’t have any understanding of this field. I spoke to Dr. Tom Frieden, the director of the US Centers for Disease Control and Prevention, and went through the statistics. The statistics don’t show that there is any problem. But he doesn’t understand this.

“I asked Frieden if it’s true that 80 percent of mohalim have antibodies for herpes and 80 percent of them do metzitzah b’peh. He said yes. I said, ‘According to your statistics, there should be at least 500 cases of herpes. How come there isn’t even one [aside from a previously documented case]? It shows that your statistics are flawed!’ The theories are not developed. They don’t prove anything. So Frieden changed the topic and started talking about something else. He had no response.”

For the rest of the interview, including Rav Belsky’s view on Mayor Bloomberg’s role in the actions against metzitzah b’peh and his suggestions for community involvement, as well as interviews with Romi Cohn, Rabbi Chaim Dovid Zwiebel, Rabbi Moshe Duvid Niederman, and many others, pick up this week’s Ami Magazine.