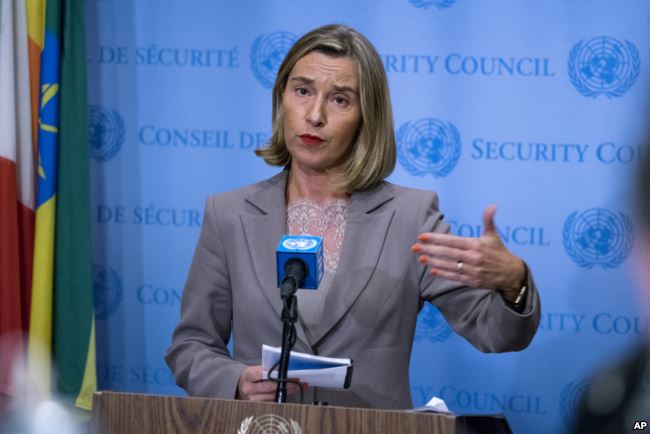 The European Union’s top diplomat said Tuesday the bloc is working with Congress and the Trump administration to ensure America’s new policy toward Iran doesn’t lead it to violating a landmark nuclear deal.

Federica Mogherini said that in meetings with administration officials and lawmakers in Washington this week she had stressed the importance the E.U. places on upholding the agreement. Under the 2015 accord, Iran curbed its nuclear program in exchange for an easing of international economic sanctions.

Mogherini allowed that it is “a delicate moment” for the deal since President Donald Trump refused last month to certify Iran’s compliance, saying that the benefits Tehran is getting from the deal are not proportional to its concessions. She said she is hopeful the U.S. would continue to meet its obligations.

“We want to see the United States continue its implementation in the future,” she told reporters at a news conference. “The E.U. has a security interest in keeping the deal working.”

She declined to comment on whether legislation pending before Congress that would attach additional conditions for U.S. sanctions relief would violate the deal, saying it was a domestic U.S. political matter. However, she said she had gotten a “clear indication that the intention is to keep the U.S. compliant.” She did not elaborate.

Mogherini repeated the long-held E.U. position that the agreement cannot be re-opened for negotiation, a stance also held by Iran and the other signatories. “If you reopen one part of it, the entire agreement is reopened,” she said. “Renegotiating part of the agreement is not an option.”

Trump administration officials have said that in order for the U.S. to remain in the agreement it must be fixed to remove so-called “sunset clauses” under which certain restrictions on Iran’s activities expire. Deal opponents say those clauses provide a pathway for Iran to resume atomic development that could lead to the production of a bomb.

Mogherini said that despite the expiration of those limits, Iran is obligated under the agreement to never develop nuclear weapons.