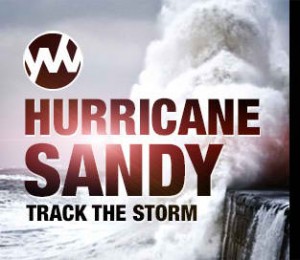 This story will be updated small breaking news items of interest in regard to Hurricane Sandy. The newer stories will be on the top, with the older items pushed down.

1:45PM EST (Tuesday): The New York Stock Exchange is reopening Wednesday after being shut down for two days because of Sandy.

10:35AM EST (Tuesday): More than 5,700 flights have been canceled on Tuesday, bringing the total number of cancellations caused by the storm to 15,500, according toFlightStats.com. That surpasses the disruptions from Hurricane Irene, which caused 14,000 flight cancellations in August 2011.

The three major New York airports remained closed Tuesday morning. Airlines hope to resume service to and from New York by Wednesday afternoon. Travel experts say it could take several days, or even into next week, for passengers to be rebooked.

10:33AM EST (Tuesday): Much of Manhattan below Midtown could be without electricity for several days after an explosion at a substation on the East River on Monday night, a spokesman for Consolidated Edison said Tuesday morning.

More than 240,000 customers – and many more people – were without power more than 12 hours after the explosion that looked spectacular but did not injure any of about a dozen utility workers who were at the site at the east end of 14th Street. Each customer could represent a household or even an entire apartment building.

10:26AM EST (Tuesday): All East River crossings have been reopened for vehicles.

10:10AM EST (Tuesday): Joseph J. Lhota, the chairman of the Metropolitan Transportation Authority, suggested that New Yorkers should expect their mass transit to return “in pieces and parts” in the days to come.

9:23AM EST (Tuesday): At least 13 deaths have been confirmed or are being investigated as related to the storm over the past 48 hours, the authorities said.

11:26PM EST (Monday): Officials at Bellevue Hospital advise that their generator only has one hour of fuel left, and their oxygen supply is running low. Numerous FDNY / EMS are being deployed.

11:16PM EST (Monday): NYU Hospital is being evacuated due to failure of all backup generators. The entire facility is without power.

9:43PM EST (Monday): There are 250,000 Consolidated Edison customers without power in Manhattan, a company spokesman says. “Pretty much everyone” south of 39th Street to the Battery are without power, according to the spokesman.

9:36PM EST (Monday): Con Ed CIG is reporting a large power outage in Manhattan. There are currently no boundaries available.

9:12PM ESDT (Monday): Power outage reported at NYU Tisch (Hospital), with a generator failure to parts of the building. Personnel are manually evacuating the PICU and NICU down 9 flights of stairs.

8:42PM EST (Monday): Per Con Ed, the Brighton Beach area will be preemptively shut down due to adverse weather conditions. The exact time is being determined by Con Ed at this time. Con Ed will cut service to an area that is bounded by the following streets: Shell Road, Gravesend Neck Road and East 15th to East 16th Street to the north; Coney Island Creek to the west; the Atlantic Ocean to the south; and Sheepshead Bay to the east.

The area includes about 28,200 customers.

8:37PM EST (Monday): A Queens Man is New York City’s first storm-related fatality. The 30-year old man was found dead by family members after being apparently trapped underneath a tree that crashed inside his home in Flushing, Queens, officials said.

8:22PM EST (Monday): The NYPD has numerous officers stranded in the Coney Island area, and the entire NYPD 60 Precinct Station House is being evacuated. The Nation Guard has been requested to assist them with boats, as the entire area is under water.

8:01PM EST (Monday): Most of Brighton Beach, Manhattan Beach, Coney Island and other areas in the confines of the NYPD’s 60 pct, are now without power.

8:00PM EST (Monday): Trees are reported to be down on most streets of Flatbush.

7:58PM EST (Monday): The Belt Parkway has been shut down in the area of Knapp Street due to the highway submerged underwater.

7:56PM EST (Monday): Many areas of Brooklyn are without power, including Gerritsen Beach.

7:55PM EST (Monday): The RFK Triborough Bridge has closed after wind gusts reached 100 miles per hour, according to Gov. Cuomo.

7:30PM EST (Monday): Emmons Avenue in Sheepshead Bay brooklyn is totally underwater, with more than 8 feet of water in the streets.

7:20PM EST (Monday): A tree has fallen on top of an NYPD vehicle on Avenue I and East 26th Street,

* Hundreds of thousands of people live in New York City’s primary evacuation zone. See the zone in orange on this map.
* Monday morning about 3,100 people were staying in 76 city shelters. Locations can be found on the city’s website or by calling 311.
* Bloomberg said people who ignore the order would not be arrested, but are being “selfish.”

3:39PM EST (Monday): A tree has collapsed onto an NYPD vehicle at the FDR Drive and East Houston Street. Two officers are pinned in the vehicle, and ESU as well as FDNY are responding for the extrication. Their exact conditions are unknown at this time.

2:57PM EST (Monday): Please be advised that the Garden State Parkway is set to close down within the next hour below Exit 129 in both directions.

2:50PM EST (Monday): A crane on top of a 75 story building is in the collapse position, and in danger of falling. Numerous FDNY and NYPD personnel are evacuating nearby buildings and streets. DEVELOPING STORY

Wind Speeds as of 1200 hours have been reported as follows:

11:35AM EST (Monday): President Obama to make a statement on Hurricane Sandy at 12:45 p.m. ET, after getting situation room briefing on storm.

11:15PM EST (Monday): The Holland Tunnel and the Brooklyn Battery Tunnel will be closing today at 2 PM. There is no estimated time for reopening