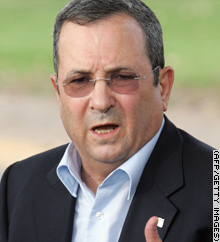 In his welcoming remarks at the Second International HLS conference in Tel Aviv, Defense Minister Ehud Barak commented on the rocket fire from Gaza.

“Following yesterday’s incident whereby an anti-tank missile struck an IDF patrol wounding four soldiers, the IDF responded with force. Terrorists were killed and dozens more were wounded. In the last month over twenty active terrorists and to our great sorrow some civilians, have been killed in the Gaza Strip; there have also been many wounded.

“The firing [of rockets] has been relentless today. As far as Israel is concerned, Hamas is responsible for the rocket-fire and all other attempts to harm our soldiers and civilians [from Gaza], even when other groups participate. And it is Hamas that will pay the heavy price; a price that will be painful.

“Israel will not accept in any shape or form Hamas’ changing of the ‘rules’ along the border with the Gaza Strip. During the last two days, the IDF, upon my instruction, has been evaluating the host of options for harsher responses against Hamas and the other terror organizations in Gaza. We will strike with an ever-growing intensity.

“The IDF is very strong. We target terrorists on a daily basis with powerful and precise strikes, while the Iron Dome batteries have fundamentally changed the security situation for our citizens. However, we must speedily complete the protection of the area which stretches from 4.5km to 7km around Gaza.

“Hamas and the other terror organizations recognize the capabilities of the IDF. If we are forced to go back into Gaza in order to deal Hamas a [serious] blow and restore security for all of Israel’s citizens, then we will not hesitate to do so.”

On Syria, Defense Minister Barak noted, “After a number of shelling incidents into Israeli territory during recent weeks, I instructed the IDF to respond in-kind should the situation recur. Today, another mortar shell was fired from Syria, landing on an IDF outpost. The Chief of Staff ordered the IDF to return fire on the mortar outpost [from which the mortar was fired]. This was a sign to Syria that we will not tolerate shelling into our territory. A complaint was also lodged with UNDOF.

“Syria has been in the midst of a brutal civil war for over a year, and the IDF has been instructed to prevent the battles from spilling over into our territory. Additional shelling into Israel from Syria will elicit a tougher response; exacting a higher price from Syria.

“’The Land of Israel is acquired through hardships’… Even after 64 years, we still haven’t found our peace and quiet. We live in a tough neighborhood; a violent, complicated, and often bloody neighborhood. One cannot choose his parents and a nation cannot choose its neighbors. They are… who they are. Therefore we must be strong and open-eyed. The IDF is strong. Its commanders – headed by the Chief of Staff – are outstanding. And we trust them.

“No one has any illusions. We have more battles ahead of us. We will also have some tough times ahead of us. But every day that passes, Israel becomes stronger, more resolute and more grounded. This is what gives us all the strength to keep us going ‘on full power’.”