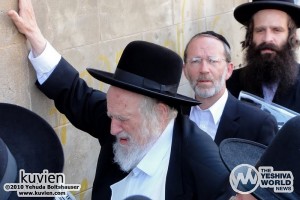 Following a meeting on Wednesday, 5 Shevat 5773 between the Gerrer Rebbe Shlita and HaGaon HaRav Shmuel Auerbach Shlita, Rav Auerbach has come out in support of voting Gimmel, Yahadut Hatorah.

The announcement appeared in the Gur-affiliated Hamodia and the Netzach-affiliated HaPeles newspapers Thursday morning, just days ahead of the 11 Shevat general elections.

Rav Auerbach is clear and succinct in his kol korei, addressing the threat to the Bnei Torah community, calling on the entire tzibur to vote for Yahadut Hatorah.

All of the polls to date indicate that the Degel split off party, Netzach, would not have passed the minimum threshold and those votes would have been wasted, possibly enough votes to bring Yahadut Hatorah to a seventh Knesset seat. The seventh slot is held by former Bnei Brak Mayor Rav Yaakov Asher.