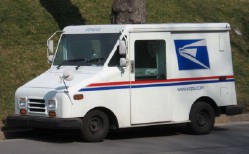 The U.S. Postal Service lost $1.3 billion in the October to December quarter, an official said on Friday, days after the beleaguered mail agency announced plans to cut back on Saturday delivery to save money.

The Postal Service lost $3.3 billion in the same period a year earlier.

This year, extra mail tied to the November elections and stronger revenue from holiday-related packages contributed to a better quarter, USPS Chief Financial Officer Joe Corbett said during a meeting of the Postal Service Board of Governors.

The October to December period, which is the first quarter of the Postal Service’s fiscal year, is typically the strongest because of the holidays.

The mail service has been grappling with tumbling mail volumes as Americans communicate more online and has struggled under the weight of massive required payments for future retiree health benefits.

The Postal Service defaulted twice last year on required payments to the federal government and lost almost $16 billion during the fiscal year.

Earlier this week, the mail agency announced plans to stop delivering first-class mail on Saturdays starting in the first week of August as part of a series of cost-cutting steps the agency is taking. The agency said cutting back to five-day mail delivery would save $2 billion a year.

The Postal Service will continue delivering packages on Saturdays and will keep post offices on their normal schedules.