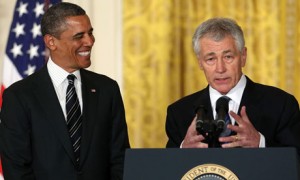 The Senate came up two votes short of the 60 needed to move Hagel’s nomination forward as lawmakers prepare to leave town for a week’s break. Democrats hold a 55-45 edge in the Senate.

Republicans had been blocking the confirmation of their former colleague and Vietnam veteran until they received information from the White House on President Barack Obama’s actions during the attack on the U.S. diplomatic mission in Benghazi, Libya.

The White House responded to that request earlier Thursday, saying Obama spoke with Libyans a day after the attack.