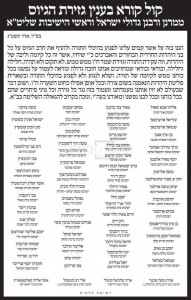 Amid reports the coalition negotiators are close to sealing a deal, Rabbonim Shlita have announced any attempt to compel bnei yeshivos to leave their limud Torah to serve in the IDF is nothing less than a “gezeiras shmad” and it must be addressed accordingly.

The kol korei signed by tens of prominent rabbonim shlita calls on the tzibur לעמוד על נפשנו, to fight this with mesirus nefesh and not chas v’sholom to permit those seeking to uproot limud Torah in Eretz Yisrael to succeed chas v’sholom.

“Nothing in the world will move us from our position and we will stand firm against any gezeira and against any enticement with all our might, body and soul and BE”H we will succeed and merit the redemption seedily in our day” it concludes.

Many gedolim in both Eretz Yisrael and outside have affixed their signature to the kol korei to give a chizuk to bnei Torah and to instruct them to remain firm during this difficult time.

Click on the image to enlarge and see the names.