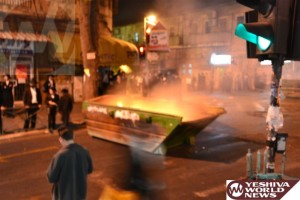 The Sunday night 10 Sivan 5773 violence in Jerusalem’s Meah Shearim neighborhood seems to have begun when two chareidi soldiers passed into the area. They were attacked by sikrikim who insulted them and began hurling objects at them. This led to pushing trash receptacles into the street and setting them ablaze, leading to local street closures.

On his Facebook page, Yisrael Beitenu leader MK Avigdor Lieberman calls on “all chareidi leaders, first and foremost representatives in Knesset, to unconditionally condemn the attack against two chareidi soldiers who simply passed through Meah Shearim in uniform”.

“While they may not agree with us regarding induction, we cannot permit a situation in which soldiers cannot enter a Jerusalem neighborhood while wearing their uniform proudly” Lieberman concludes.