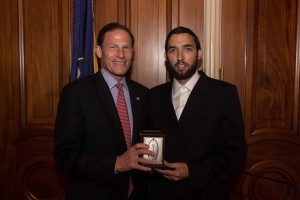 [VIDEO IN EXTENDED ARTICLE] In 2006, the U.S. Congress designated Jewish Heritage Month to celebrate the talents and contributions of the American Jewish community to American society. Last week, the Friedlander Group of New York hosted a Congressional Tribute to distinguished Jewish Americans, a celebration of Jewish American Heritage, at a kosher luncheon in the U.S. Capitol Building.

The event began when Allen Rothenberg, one of the honorees, sang the National Anthem in the presence of his Senator, Bob Casey (D-PA). Rothenberg, an attorney who founded his own firm with branches in Hackensack and other Jersey towns, and has offices across the nation, has served as the national president of COLPA, the National Jewish Commission on Law and Public Affairs. In his speech to the crowd, Senator Casey highlighted Rothenberg’s dedication to the fight for religious freedom.

Greg Rosenbaum, co-chair of the Jewish American Heritage Month Foundation acknowledged the event as an integral part of the Washington, DC celebrations. Rosenbaum introduced Senator Sherrod Brown of Ohio, who quoted Rabbi Abraham Joshua Heschel, a great leader of the civil rights movement, who said, “What begins as inequality of some inevitably ends as inequality of all,” and highlighted his quest for economic justice based on Jewish teachings.

Senator Brown introduced honoree Daniel E. Kestenbaum of Bergenfield, New Jersey, the founding director of Kestenbaum & Company, a New York City-based boutique auction house. The core value of Kestenbaum’s company is to seek out and make available Judaic historical artifacts that are crucial to a keener understanding of one’s Jewish identity. He believes that access to important items of Judaica will lead to a better appreciation of “ethical citizenship.” 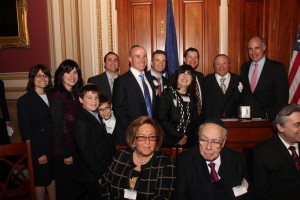 Senator Brian Schatz of Hawaii, Senator Al Franken of Minnesota, Congressman Brad Schneider of Illinois, were all introduced by Master of Ceremonies Rabbi Joseph Potasnik, Executive Vice President of the New York Board of Rabbis, highlighted the theme of the Congressional Tribute, which is to commemorate Jewish American Heritage in honor of Jewish contributions in business, government, military service, political life, health and science. 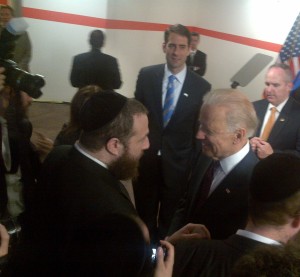 Rabbi Levi Shemtov, the Executive Vice President of the America Friends of Lubavitch, thanked The Friedlander Group for organizing the Tribute Event, and highlighting unique aspects of American Jewish life. Rabbi Shemtov also gave a d’var Torah on the weekly parsha. Congressman Joe Kennedy of Massachusetts celebrated the honorees who “epitomize the values of the Jewish community and American experience.”

Congresswoman Debbie Wasserman-Schultz of Florida, who conceived the idea of Jewish Heritage Month and sponsored the legislation that made it possible, was introduced by David Mandel, CEO of OHEL Children’s Home and Family Services. She, too, acknowledged the importance of the Congressional Tribute to Jewish Americans in the Capitol, and said it was an important opportunity to educate members of Congress and all Americans about the positive impact Jews have had on American culture throughout American history.

Senator Jeanne Shaheen of New Hampshire was there to honor Simcha Eichenstein, an advisor to the New York State Comptroller and predicted a great future for him in public service. She also paid tribute to former New Hampshire senator, Warren Rudman, as a great Jewish American leader. She presented awards to Rabbi Elie Abadie, M.D. the spiritual leader of the Edmond J. Safra Synagogue on Manhattan’s Upper East Side and to ten founding members of the congregation, that is currently celebrating its 10th anniversary,

Senator Richard Blumenthal of Connecticut said that Jewish Heritage Month strengthens his bonds to his heritage and the legacy of his parents. He said America gave his immigrant parents a chance for a better life and that America created an environment that enables the Jewish people to be strong for our faith and Israel. Senator Blumenthal also presented Simcha Eichenstein with an award and praised him for upholding the highest ethics and Jewish commitment to public service.

Representative Wasserman-Schultz presented an award to Harvey and Gloria Kaylie, stalwart supporters of OHEL. Since 1969, OHEL has been helping people of all ages surmount everyday challenges, heal from trauma, and manage with strength and dignity during times of crises. They provide foster care, housing, outpatient counseling and day programs. Driven by a shared vision to break-down stigma in the community, the Kaylie’s provided the seed capital for OHEL to open the ground-breaking Camp Kaylie at OHEL—the first-of-its-kind integrated summer camp for kids of all abilities. Vice President Biden also spoke at a Jewish Heritage reception hosted by the Democratic National Committee which was held on May 21 and attended by various Jewish leaders including Ezra Friedlander.