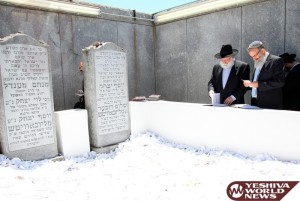 While candidates resign themselves to the reality they will not be eligible to run in the upcoming election for new chief rabbis of Israel, one of the candidates exhibits signs of continuing with life as usual, at least to some degree.

Tzohar Rabbonim leader and a leading contender to become the next Ashkenazi Chief Rabbi of Israel, Rabbi David Stav, traveled to the United States. Photos from the flight and information from travelers on that flight show the rav and a Tzohar official accompanying him spending most of the flight time engulfed in Gemara Eruvin.

At present, as the dati leumi community remains divided regarding its candidate for Ashkenazi Chief Rabbi, Rabbi Stav enjoys the backing of a number of parties in Knesset including Labor, The Movement, Yesh Atid and some members of Bayit Yehudi.

Rabbi Stav was warmly greeted at the Ohel of the Lubavitcher Rebbe by Rabbi Abba Refson, director of the Chabad House at the Ohel, accompanied by renowned lecturer and author Rabbi Simon Jacobson. After a short study of Chassidus and writing a Pa”N, Rabbi Stav entered the sacred Ohel where he prayed for his success.

The visit was organized by a personal friend, Rabbi Yoel Kaplan, the Rebbe’s emissary to the Balkans and with the help of Bentzi Sasson.