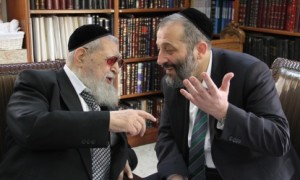 Earlier this week, YWN-ISRAEL reported that Maran HaGaon HaRav Ovadia Yosef Shlita has selected one of his sons as the party’s candidate, HaGaon HaRav Avraham Yosef. Being that Rabbi Boaron enjoys widespread support, Shas officials see his candidacy as a threat to Maran’s choice.

Israel Radio reported on Thursday morning, 19 Tammuz 5773 that someone with authority met with Rav Boaron and tried persuading him to bow out of the race, telling him “your candidacy brings grief to Maran Rav Ovadia.” The reported stated a “senior dayan and employee of the Ministry of Religious Services were involved.”

Kikar Shabbat reports that person is Petach Tikvah Chief Rabbi Binyamin Atias in addition to Shas leader Aryeh Deri. The rav reportedly told them both that he has no intention of backing out of the race and plans to remain till the elections.

Rav Boaron denies reports that he was threatened in any way but does confirm officials tried to persuade him to drop out of the race.

Rav Boaron is supported by outgoing Rishon L’Tzion HaGaon HaRav Moshe Shlomo Amar Shlita in addition to having considerable support among the voting body of 150 people.

Kikar also adds that Rav Avraham Yosef visited the home of Rav Boaron last week, asking for his support. He was told that he [Rav Amar] is still chief rabbi; he will not come out in support of any of the candidates. Kikar adds the real reason is that Rav Amar stands behind Rav Boaron.

Deputy Minister of Religious Services (Bayit Yehudi) Rabbi Eli Ben-Dahan told Israel Radio if the facts in the report are indeed accurate, it is a very serious matter, one that will involve the legal system and the Commissioner of Civil Service.