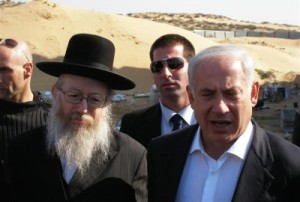 MK (Yahadut Hatorah) R’ Yaakov Litzman points out that Finance Minister Yair Lapid is not the only one to blame, but Prime Minister Binyamin Netanyahu is equally responsible for the cut in monthly child allowance payments. The former deputy health minister made his remarks during a session of the Knesset Finance Committee.

At present, monthly child allowance payments for the first child is 175 NIS, 263 NIS for the second 295 NIS for the third and 459 NIS for the fourth. From the fifth child on the payment is 389 NIS. Under the new arrangement, the amount paid will be the same for every child, 140 NIS monthly. The savings to the state will be 2.7 billion NIS.

MK (The Movement) Elazar Stern feels that people such as MKs, who are far from being needy, should not receive the monthly payment to permit needy families to receive more. MKs (Likud) Reuven Rivlin and (Bayit Yehudi) Zevulun Kalfa feel the monthly payments given to families that earn a good living should be taxed.

According to Bituach Leumi (National Insurance Institute), the change in child allowance payments will place no less that 35,000 children under the poverty line.

Meretz leader MK Zahava Gal-On insists the government targeted the monthly allowance to deliver another blow to the chareidim, nothing more. She laments the fact that the administration fails to take the plight of the children into consideration.

MK (Labor) Miki Rosenthal adds that hate for the chareidim is what seems to be compelling the finance minister today. He adds that while the administration seeks to encourage getting out into the workplace, today, half of the working Israelis are incapable of meeting their monthly expenses so this alone is not the solution.