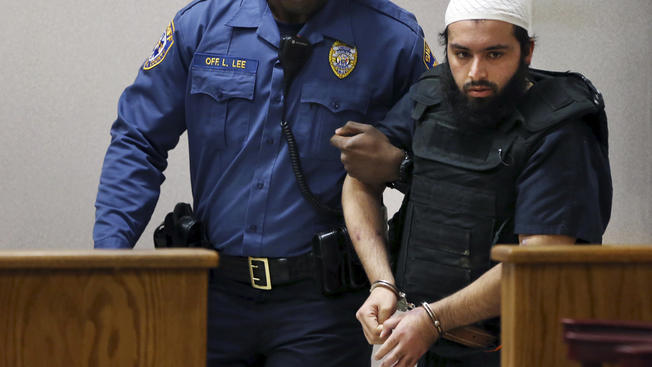 Jurors in the attempted murder trial of a man already convicted of planting bombs in New York City ended their first day of deliberations Thursday by re-watching surveillance video of the shootout with police that preceded his arrest more than three years ago.

The panel of eight women and four men began deliberating at about 2 p.m. and concluded at 4:30 p.m. without reaching a verdict. They will reconvene Tuesday.

Ahmad Khan Rahimi, an Afghanistan-born naturalized U.S. citizen whose family operated a takeout chicken restaurant in the same city where he’s being tried, faces attempted murder and other charges. His attorney contended in closing arguments Thursday that Rahimi acted justifiably in self-defense when police shot at him.

The jurors filed back into court to watch the video clips, which depicted a running gun battle involving numerous police officers through the streets of Linden, New Jersey, where Rahimi was eventually captured after a two-day manhunt in September 2016.

Two days earlier, a bomb had exploded in New York’s Chelsea neighborhood with enough force to toss a trash bin in the air, shatter windows and leave metal scraps strewn around the street. During his trial in New York, prosecutors showed jurors videos of the explosion and also of Rahimi dragging two small suitcases as he walked from Penn Station to the location where the bomb exploded.

A second bomb placed nearby didn’t explode. But hours earlier, according to prosecutors at the first trial, Rahimi planted a bomb at a charity road race in Seaside Park, New Jersey, that exploded but didn’t hurt anyone.

Rahimi graduated from high school in the area in 2007 and later attended Middlesex County College, where he majored in criminal justice but didn’t graduate. After his arrest, acquaintances and customers of the family’s restaurant described him as reserved but friendly. One friend said Rahimi had returned from a trip to Afghanistan several years earlier “more religious” and dressing differently.

Tensions lurked under the surface, however, as court records showed that Rahimi was accused of stabbing a relative in 2014, though a grand jury declined to bring criminal charges, and he also was accused of violating a domestic-violence restraining order in 2012.

A lawsuit filed by Rahimi’s father and two brothers against Elizabeth in 2011 claimed the city harassed them because they were Muslims, using the pretense that their restaurant was violating a local ordinance by staying open too late. The lawsuit was terminated in 2012 because one of the brothers had pleaded guilty to blocking police from enforcing restrictions on the restaurant.