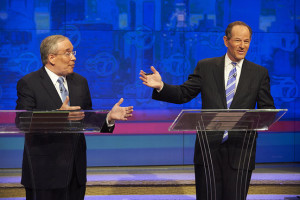 With four weeks until the primary, 68 percent of Spitzer voters and 74 percent of Stringer voters say they definitely will vote for the candidate they name today.

“Everyone seems to be against former Gov. Eliot Spitzer except the voters, especially black voters,” said Maurice Carroll, director of the Quinnipiac University Polling Institute. “Spitzer is all over the TV screens, building on his better name recognition and leaving Manhattan Borough President Scott Stringer in the dust.”

Respondents were polled both before and after NY1’s city comptroller debate this past Monday.

During the debate, Mr. Stringer suggested voters should not give Mr. Spitzer a second chance because of the scandal that led to his resignation and his performance in the governor’s office. Mr. Stringer described Mr. Spitzer’s time as governor as a “colossal failure.”

The poll showed 57% of likely primary voters believe Mr. Spitzer’s resignation is a legitimate issue. However, only 23% of voters believe his behavior disqualifies him from consideration. 44% said it is an issue, but not a disqualifying one, while 32% believe that’s it’s not even an issues for consideration.