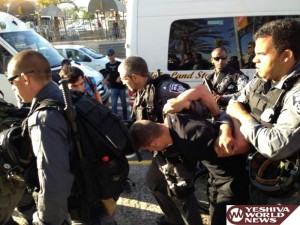 The violence seen in the photos followed the deaths of three Arabs who were involved in rioting and attacks against IDF soldiers earlier in the day in Kalandia.

Soldiers arrived in Kalandia to arrest a wanted suspect. This usually refers to one who has been involved in acts of terror, including firebomb attacks. As the force approached the suspect they were targeted with cinderblocks. As the suspect continued to flee in the hope of avoiding arrest, residents began awakening and soon thereafter the force was under attack by an estimated 1,500 people.

An IDF force in the area provided back up. Only after they realized teargas was ineffective was the order given to fire at the legs of the rioters.