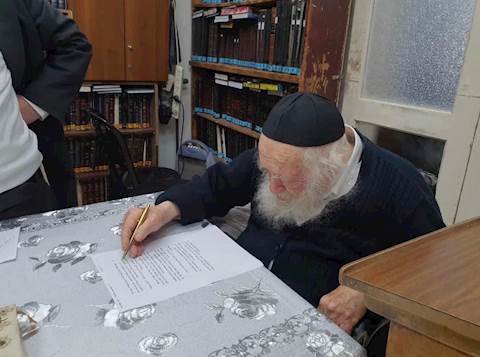 In a special letter written on Monday and published on Tuesday morning, Hagaon Harav Chaim Kanievsky called to Klal Yisrael to be mapkid about the use of cell phones in shuls and batei medrashos.

“To the honor of Rabbanim ha’gaonim and gabbaim of shuls in every location,” Harav Chaim wrote: “In our many sins it’s already been many weeks since we’ve been driven out of our shuls and batei medrashos…apparently this is a sign from Shamayim regarding the sin of being mezalzel the kedushas beis knesset by the fact that cell phones are on during davening and people are speaking on them. This is a great zilzul to tefilah and the kedushah of the beis knesses which our ancestors would never have imagined.”

“Therefore we must be metakein a set takana that it’s an issur chamur to enter shul to daven with a phone that’s not turned off and it must be turned off during the entire davening. The gabbaim should take responsibility to be careful about this and warn the mispalleim as a ‘chok v’lo yaa’vor.’

“It’s also fitting that when we are zocheh b’mheira to return to our shuls that the Rabbanim should say words of chizuk and hisorrerus in the severity of the issur chamur of being mezalzel kedushas batei knessiot and batei medrashos.” 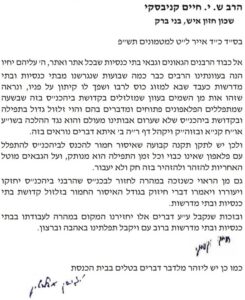 Harav Chaim ended the letter by writing: “And in the zechus of accepting these matters, Hashem should return us swiftly to His avodah in shuls and batei medrashos b’rov am and accept our tefillos b’ahavah and ratzon.”

Hagaon Rosh Yeshivah Harav Gerson Edelstein signed the letter and added: “Likewise one should be careful about speaking devarim betalim in the beis knesset.”