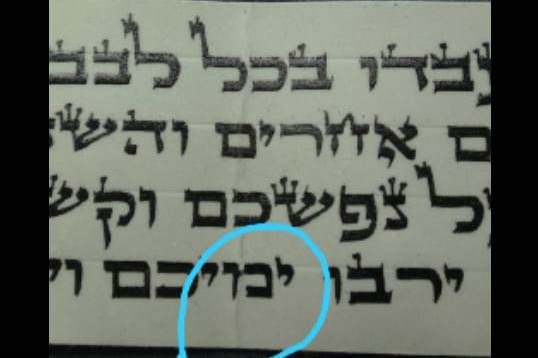 The condition of a yeshivah bochur from Neve Yaakov who was bitten by a poisonous snake on a hike last week and was hospitalized in extremely critical condition has improved.

The bochur regained consciousness for the first time on Tuesday night and even mumbled a few words. The doctors removed his ventilator and he is now breathing on his own. “Mazel Tov, Mazel Tov,” his father, R’ Dovid Fogel, said. “A new son was born to me. Baruch Hashem, Menachem woke up.”

According to a B’Chadrei Chareidim report, a relative checked the bochur’s tefillin and it was found that the word “ye’meichem” in the passuk “l’ma’aan yirbu ye’meichem” was passul. Apparently, after the parshiya was folded, it created a space in the letter “mem” which invalidated the word. The tefillin were immediately sent for repair of course.

Menachem was hiking at Nachal Tze’elim in the south with friends last week when he suddenly fainted and lost consciousness. His friends summoned help and he was evacuated to Hadassah Ein Kerem Hospital in Jerusalem.

However, no one knew he had been bitten by a snake and it was only after a few hours passed that medical staff discovered the bite, which is what caused him to lose consciousness and as a result, suffer from heatstroke, one of the bochur’s friends told Kikar H’Shabbos.

The name Raphael was added to his name according to the instructions of Hagaon Harav Chaim Kanievsky.