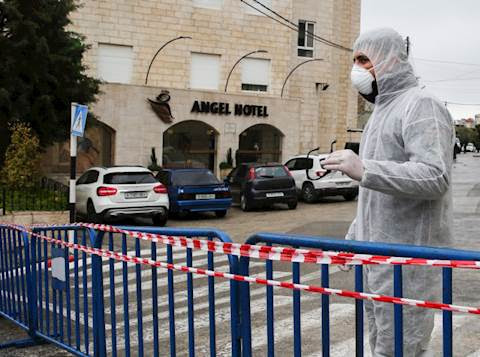 There are 16,712 confirmed cases of the coronavirus as of Motzei Shabbos, an increase of only four cases in the past 24 hours and no new fatalities, with the death toll remaining at 279.

One of the new virus patients is a resident of the Mishan nursing home in Be’er Sheva, site of one of the largest virus hotspots in Israel, with 14 residents passing away after contracting the virus. The resident is hospitalized at Soroka Medical Center Be’er Sheva in moderate condition.

Health Minister Yuli Edelstein issued an order on Thursday allowing up to 50 people in indoor gatherings.

All municipal schools in Bnei Brak are reopening on Sunday. Preschools and ganim reopened for an hour on Friday to begin easing the adjustment for the children who have been out of their classrooms for two months.

A 77-year-old Arab woman died of the coronavirus in the Gaza Strip on Shabbos, the first fatality in the coastal enclave.

The woman, who suffered from underlying health issues, returned to Gaza from Egypt on Tuesday and was immediately placed in an isolation facility near the Rafah border crossing like all new arrivals.

The Gaza Strip’s health ministry announced last week that another 35 cases of the coronavirus have been confirmed among Gazans returning from Egypt, raising the total number of cases in Gaza to 55. All 35 patients were staying at isolation facilities when they were diagnosed.

The Erez border crossing between Gaza and Israel will remain closed until the end of July, opening only for urgent humanitarian cases.