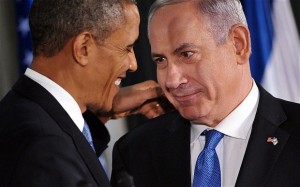 Prime Minister Binyamin Netanyahu will be meeting with US President Barak Obama when the two are in New York City attending the United Nations General Assembly. At the start of the cabinet meeting this week Mr. Netanyahu stated “In another week-and-a-half or so I will travel to the UN General Assembly. I will first meet with US President Barack Obama.

“Only a combination of these four steps will constitute an actual stopping of the nuclear program, and until all four of these measures are achieved, the pressure on Iran must be increased and not relaxed, and certainly not eased.

“I believe that the events of recent weeks have confirmed the assumptions upon which we have been acting:

1. A recalcitrant state that develops or acquires weapons of mass destruction is certainly likely to use them. It is possible to say that ultimately it will use them.

2. Only a credible military threat can allow diplomacy or other steps to effect a halt to this armament process.

3. Israel must continue to build up its strength so that it will always be able and ready to defend itself by itself against any threat. I reiterate something that is familiar to you: If I am not for myself, who will be for me? I say this collectively on behalf our people.

“Regarding our people, the holidays are almost upon us. I wish the entire people of Israel a Happy Sukkot. Go out and enjoy it with your families. There is a reason why I am certain that this will be a happy holiday and that is because the UN recently issued the World Happiness Report and I was not surprised that Israel rose several places and is now in 11th place, ahead of many developed countries. Soon we will be in the top ten. Thus, I would like to wish all Israeli citizens a happy and joyous holiday.”