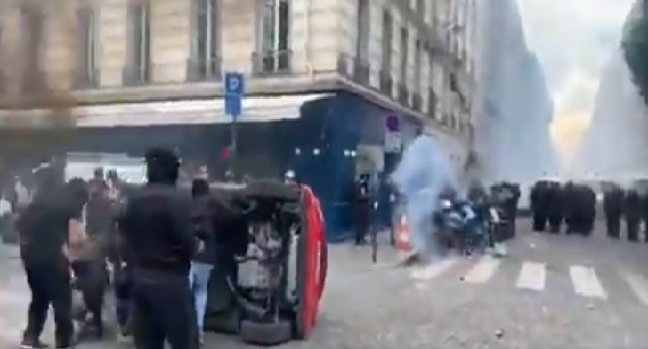 A frightening scenario is occurring in France in recent days in the city of Dijon, with four consecutive days of guerrilla warfare between Chechen and Muslim gangs, complete with Kalashnikov rifles and other weapons, iron bars, gunshots and shouts of “Allah Akbar.”

The violence, apparently sparked by an alleged assault on a Chechen teenager, is centered in the low-income district of Grésilles, which has a large Muslim population. Cars have been set on fire, a police officer lynched, over a dozen wounded, and despite the hundreds of anti-riot police deployed, not one arrest has been made.

Meyer Habib, a Jewish Member of the French Parliament, wrote on social media: “After the anti-Semitic outbursts when they screamed “Dirty Jews!” these images reflect a harsh reality in France of 2020. And what are we doing? Nothing!”

“Furthermore, the extreme left wants to dismantle the police. Instead of suspending our police forces – “the suspects of racism” – it would be better to invest our means in enforcing order. It’s an upside-down world. The Republic is falling. It pains me about France and I’m afraid it’s too late.”

There is not #Syria there is #France
Gunfire and explosions heard as French special forces enter #Dijon to take back control of the city’s streets from North African, Albanian and Chechen gangs. pic.twitter.com/PS0wveVNJV

I see the buses are still running on schedule in #Dijon 13 pic.twitter.com/Ve4xlU0g2c