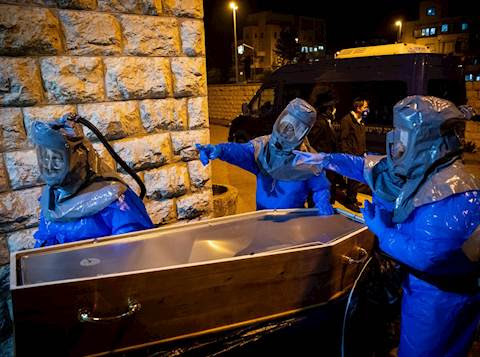 A chilling story was told by Rav Eliyahu Keller of Givat Shaul in Yerushalayim in the Yated Hashavua about the kevurah of his father, z’tl.

Three years ago, Rav Eliyahu’s father, Rav Avraham Moshe Keller, made Aliyah from Argentina at age 79, fulfilling a lifelong dream. Rav Keller made his home at the Shomrei Hachamos senior living center where he became known for his love of the Kitzur Shulchan Aruch. He was never seen without the sefer, learning out of it every day and teaching others from it.

A month and a half ago, Rav Keller was niftar from the coronavirus. Due to the pandemic, his levaya – which took place at the Shamgar funeral home on the day he was niftar per Yerushalmi minhag – was held with very few people present, at 1 a.m. in the morning.

Another Yerushalmi minhag is that the children and grandchildren of the niftar do not go to the bais hakvaros during the kevurah. This fact led to a painful situation of the possibility of less than a minyan of men being present at the kevura. Rav Eliyahu, the only son of the niftar, couldn’t go and neither could his two sons-in-law since both are Kohanim. Rav Eliyahu’s sister who lives in Israel and the four members of her family were the only ones who could attend the kevurah.

Suddenly, a man who appeared to be about 70, who was standing on the side during the levaya, approached and said that he was joining in to travel to the kevurah at Har Hazeisim. The relatives were astounded that an elderly stranger would travel at 1 a.m. in the morning during a pandemic to Har Hazeisim and they politely told him: “You don’t have to trouble yourself.”

However, the man insisted. The family members asked him his name and if he knew the niftar and the man responded that he’s a relative of the niftar.

Now the family members were even more confused. There were very few family members living in Israel since most of their relatives still lived in Argentina and they were familiar with all of them. They were sure the man must have made a mistake. Since there were many levayos at Shamgar that night, one after the other, they gently explained to him that he must be looking for a different levaya.

However, the man held his ground and without explaining himself further simply entered the car of Rav Eliyahu’s sister’s son-in-law who was driving to the kevurah. Along with some volunteers from the Chevra Kadisha, they now had a minyan for the kevurah.

After the kevurah, the son-in-law, still puzzled by the stranger’s presence, approached him and said: “What’s your name?”

“Gantzfried,” the man answered. The son-in-law was sure that there were no relatives of the family named Gantzfried and was now even more puzzled.

The mysterious man returned from the beis kevurah in the son-in-law’s car along with another relative. After they dropped off the man, the son-in-law asked his relative: “Do you know this ‘relative’ of ours named Gantzfried?”

The relative turned white. “That’s the name he told you?” he asked in astonishment. He quickly turned around, craning his neck to see if he could still spot the man, who had just exited the car a moment ago. But he didn’t see him and even after they quickly drove around the area where they just dropped him off, they saw no glimpse of him.

The relative had immediately remembered that the name of the mechaber of the Kitzur Shulchan Aruch is Harav Shlomo Gantzfried.

Rav Eliyahu said that he has no doubt that the man was a shaliach from Shamayim to accompany his father on his final journey due to his incredible attachment to the Kitzar Shulchan Aruch.

“When my father was young, his parents immigrated from Poland to Argentina,” Rav Eliyahu said. “During that time, in the period before World War II, there were no Torah institutions there. But there was a wonderful Jew named Reb Ze’ev Greenberg who taught Torah and instilled yiras Shamayim in thousands of Jews who had immigrated to Argentina from Europe.”

“When my father reached the age of Bar Mitzvah, Rav Greenberg said to him: ‘How fortunate you are for being zocheh to be mekabel the mitzvos. I’m giving you a sefer kodesh called the Kitzur Shulchan Aruch authored by Rav Shlomo Ben R’ Yosef Gantzfried as a gift and it will accompany you for your whole life. Lean this sefer and you’ll be zochech to be a good Jew and fulfill the halachos…and Hakadosh Baruch Hu will be happy with you.'”

“Abba took the sefer and viewed it as a mission for life. He learned the Kitzur Shulchan Aruch every day, not missing even one day from the time he was Bar Mitzvah until the day he died. I asked him once how many times he learned the sefer and he said ‘maybe 30 times’ and this was 25 years ago!”

“When my parents decided to make Aliyah my father withdrew all his savings from the bank. That night thieves broke into their home and right in front of their eyes stole their life savings and all their jewelry.”

‘My mother turned to my father in despair, asking ‘What will we do now?. My my father answered quietly: ‘It says in the Kitzur Shulchan Aruch that everything Hashem does is for the good. Apparently Hashem gave us a gift by making sure that we’ll be zocheh to reach Eretz Yisrael b’shleimus like Yaakov Avinu when all his wealth from other nations remained behind when he went to Eretz Yisrael.”

“My mother told us that over 65 years of marriage, she never once heard my father make a disparaging remark or speak lashon hara. If someone said something negative in his presence he acted as if he didn’t hear it, saying ‘the Kitzur Shulchan Orech doesn’t allow this.'”

“My father had incredible yiras Shamayim. Once, in a moment of candor, he told me the secret of his Yiras Shamayim: “The first saif of the Kitzur Shulchan Aruch begins with ‘Shavisi Hashem L’Negdi Tamid. – it’s a klal gadol b’Torah and the maalos of Tzadikim.'”

“Abba lived with this saying his entire life and each time he opened the Kitzur, before opening it to the page he left off, he would turn to the first page and read the first sentence.”

“Considering the way our father lived his life, we couldn’t be too surprised by the ‘mysterious stranger named Gantzfried.'”

Rav Keller concluded the story by saying that he was told by morei halachah that it’s a mitzvah to publicize the story to teach others how many merits a person acquires by learning the sefarim of the Geonei HaDoros.