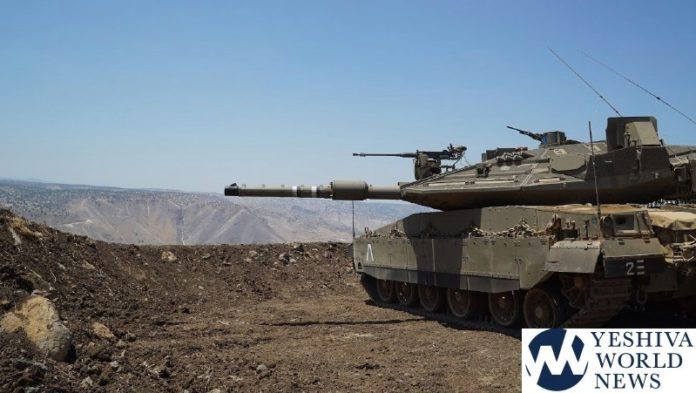 The IDF thwarted an attempted Hezbollah infiltration into Israel from Lebanon on Monday afternoon, when several terrorists entered a few meters inside Israeli territory across the Blue Line [the international border]. IDF soldiers identified the terrorists and opened fire with machine guns, artillery guns and tanks.

The IDF closed off roads in the Har Dov area in the wake of the incident and instructed Israeli residents of the north to remain at home. Following the end of the incident, they were given the all-clear to resume normal activity.

However, IDF Spokesperson Hidai Zilberman said that the IDF considers the incident to be ongoing. “There are tense and complicated ahead of us,” he said.

“We are amid a difficult security incident,” said Prime Minister Binyamin Netanyahu, who was pulled out of a Likud meeting to be briefed on the incident. Netanyahu and Defense Minister Benny Gantz, who was at a Blue & White party meeting, left the Knesset to travel to IDF headquarters in Tel Aviv.

As tension on Israel’s northern border reached record highs amid reports of an imminent Hezbollah attack, a report on Sunday morning said that Hezbollah already initiated an attack against IDF soldiers but canceled it at the last minute.

The Walla report said that the media coverage on the increased IDF presence on the northern border led senior Hezbollah operatives to cancel the attack, which Hezbollah planned in retaliation for airstrikes on Syrian targets last week attributed to Israel which killed Hezbollah member Ali Kamel Mohsen Jawad. Israel sent a warning to Hezbollah against a retaliatory strike, saying that it had no intention of killing Jawad.

The report added that the IDF warned that even if the report is true, the Hezbollah attack was only temporarily delayed and not canceled altogether. The IDF is prepared for an imminent attack and has minimized the presence of troops in open areas near the border where they could be subject to sniper fire or explosives or even the launching of anti-tank missiles.

The IDF also deployed Iron Dome batteries and artillery guns along the border on Sunday night.

IDF intelligence officials have reason to believe that the attack will be specifically on IDF soldiers and therefore the daily routine of Israeli citizens near the border had not changed apart from the closing of roads near the border.

Deputy leader of Hezbollah Sheikh Naim Qassem said in an interview on the Lebanese Al Mayadeen TV channel that the terror group’s plan to retaliate against Israel still exists. “We’re already used to Israel’s threats,” Qassem said. “They’re not new for us and we won’t be dragged after them.”

“From Israel’s viewpoint, a war is unthinkable because it won’t be able to withstand it. If [a war] will break out, we’ll respond with greater force than the previous war because we’re more prepared and we’ve improved our capabilities.”

“I remind both Lebanon and Syria that they are responsible for what is happening in their territory. The State of Israel will demand this responsibility. We are not looking for unnecessary escalations, but whoever tests us will meet a very strong response. I hope we will not have to use it.”