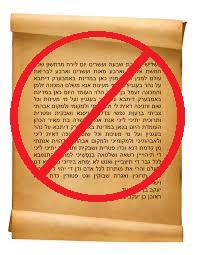 There are numerous women out there who halachically may not remarry – because their halachic husbands have not given them a Get.  Most of the time, these men do not issue the Get because they feel that they are, have been, or could be alienated from their children on account of their mothers.

The question is whether this is a justifiable position – to indefinitely withhold a Get under such circumstances.  There are Rabbis on all sides of the spectrum. We can divide these Rabbis into three groups:

Group A Rabbis:  A man may never withhold a Get from his wife when they are living separately from each other and they have irreconcilable differences.

Group B Rabbis:  There are some circumstances where a man may withhold a Get from his wife, even for a protracted period of time.

Group C Rabbis:  It is always justifiable for a man to withhold a Get from his wife if he feels any degree of alienation or possible alienation from his children on the part of the mother of the children.  This is true even for a protracted period of time.

BEING SENSITIVE TO THE PLIGHTS

Most people are already sensitized to how horrible it is to withhold a Get from an ex-wife.  It causes needless pain and suffering, not to mention major Chilul Hashem, a desecration of the Divine Name.  We are perhaps not sufficiently sensitized to the plight of an alienated father who sincerely wishes to see and spend time with his children.

The sources that will be cited below do back up either the Group A Rabbis or the Group B Rabbis.  We will, b’Ezras Hashem, try to interview some of the Group C Rabbis to ascertain their position in light of the sources cited below.  Below is a discussion

A number of years ago, this author posed the following question to a well-respected Posaik who can be categorized as in Group B:  He preferred not to be identified at the time:  “Is it ever permitted for a husband who is no longer living with his wife to withhold the giving of a Get to his wife?”

The Posaik responded, “It is never permitted to withhold a Get in order to try to negotiate better divorce terms, but it is permitted to do so in response to false legal accusations that are still causing a continuing negation of the father’s rights to see his children.”  The Posaik claimed that when a false report has been filed against a husband and the husband is not allowed to see his children as a direct result of the false report, he may, with the permission of a reliable Posaik, withhold the get as leverage to ensure that the situation be rectified.

The Posaik elaborated that the reason behind the ruling is not, heaven forbid, to punish her, but rather to effectuate the relief of an untenable and ongoing situation.  “Halachically, this dispensation is a form of the Talmudic concept discussed by Rav Nachman in Bava Kamma (27b) cited  by the Bais Yoseph (Choshain Mishpat 4).-  “avid inesh dina lenafshay, a person may under certain and specific circumstances effectuate unilateral action.”

When asked who should be the arbiter as to whether these accusations are true or false, the Posaik responded that it definitely cannot and should not be the husband.  It must rather be the ruling of a competent Rav or Bais Din, and only after a forensic evaluation has been conducted, where both parties had been spoken to, and after the determination that there doesn’t exist any corroborating evidence.

This author asked, “Who is to choose the Rav or Bais Din who will rule on the case?”

The Posaik responded, “It should not be the wife, because she may choose Rabbis or Dayanim that are biased and on her side.  It cannot be the husband, because he will choose people that are biased toward him.  And, in a society where there are no longer any Kehilos to speak of, it is very difficult to come up with a nation-wide A-List of competent and reliable Rabbonim and or Batei Dinim.

As a society, we have become more tolerant and accepting of repulsive behaviors that were once anathema to all decent people. This is a most unfortunate state-of-affairs that must be changed. A person who pursues false criminal allegations against a spouse resulting in arrest and legal consequences where the other parent cannot see the children, has crossed a horrifying and abominable line in conduct, and has placed their very own Olam haba in jeopardy (see Rambam Hilchos Chovel UMazik 8:9 regarding the repercussions of Mesirah where there is no Pikuach Nefesh involved).   The further prohibitions of Motzi Shaim Rah, and lying are also not inconsequential.

Several lawyers have informed this author of the unfortunate reality – false accusations abound in contemporary divorces.

The need for resolving this quandary of making sure that we do not create Agunos and at the same time ensuring that false accusations are not made against a spouse is most acute.  Both scenarios are very serious, for just as causing an arrest on false abuse charges jeopardizes Olam HaBah, so too does the notion of making Agunos.

The Chezkuni (Bereishis 3:16) cites a Midrash and writes that if someone is betrothed to a woman and leaves her stuck as an agunah, then he is a denier of the World to Come. Consequently, he loses his share in Olam Ha’Ba — the world to come. The Baalei HaTosfos cite the same exposition and come to the very same conclusion.  Making an Agunah causes one to lose Olam Habah.

There, in the Midrash, the status of the agunah began at the very very beginning of a marriage–upon halachic betrothal. The contemporary Agunah is, of course, after marriage.  Nonetheless, the idea is the same–these Rishonim hold that the husbands have lost their share in Olam Ha’Bah. Their fate and future no longer lie with Abraham, Isaac, and Jacob and their grandparents and great-grandparents for generations. Rather, the fate of these husbands is with the likes of the evil Bilaam and Gechazi.

WHEN THE WOMAN IS AT FAULT

But what if it was the woman who caused the marriage to fall apart? Is there then a rationale to hold back the Get?

There is a fascinating Chasam Sofer (Nedarim 29) that even in an extreme case where a wife sinned with an extramarital relationship,  “Ein lanu le’agein osa–we are not to make her into an agunah.” The Chasam Sofer continues that this is both obvious and clear.

HOW SHOULD WE REACT WHEN WE SEE AN AGUNAH?

What should our reaction be when we see an Agunah? The Responsa Yeshuas Malko (EH #54) by Rabbi Yisroel Yehoshua Trunk (Poland 1920-1893) writes, “All of Israel is obligated in trying to help such a woman.”

Rav Moshe Shternbuch of the Eida HaChareidis in Jerusalem (Teshuvos v’Hanhagos Vol. V #44) writes regarding someone who is refusing to give a get to his wife, it is “permitted and proper to publicize” that “no one should have anything to do with him.”  The Posaik mentioned in the very beginning of this article would qualify this ruling of Rav Shternbuch as applicable only when the husband is not trying to get the spouse to remove false charges, and only when the charges have not been accompanied with corroborating evidence.

The Shulchan Aruch (Even HaEzer 1:11) rules that it is proper to enact laws and stipulations regarding marrying an additional wife (this was according to those that had not adopted the ban of Rabbeinu Gershom on polygamy). The Vilna Gaon explains that the Shulchan Aruch writes this in order to avoid situations which may cause or tempt the husband to make his first wife an agunah.

We can make two observations regarding this explanation of the Vilna Gaon. The first is that the notion of husbands making their wives into Agunos as a means of retaliation is certainly not new. The second observation is that we see clearly that steps should be taken to avoid this tragic reality of Agunos from coming about.  It is our communal responsibility.

Rav Moshe Feinstein, zt’l (Igros Moshe YD Vol. IV #15) in a letter to Rabbi Chanina Simcha Posner written in the summer of 1976, writes categorically that no one party has the right to be me’agein the other party for financial purposes. (Me’agein is the verb form of making someone into an agunah.)

JAILING SUCH A HUSBAND

Elsewhere, the Shulchan Aruch rules that it is generally forbidden to judge on Shabbos (Orech Chaim 339:1). The Remah adds that even if someone needs to be punished it is forbidden to place him in jail so that he not run away. The Mishnah Berurah (329:14), written by the saintly Chofetz Chaim, rules that this ruling of the Remah does not apply to husbands who are refusing to give their wife a get. He writes that one is allowed to put such a husband in jail over Shabbos so that he will not run away and will thus be present on motzaei Shabbos to give a get to his wife.

Not one of these sources is denying the right of a husband to present his side of the story to a beis din. What these sources all do, however, is demonstrate that the refusal to come to the table and the withholding of a get to inflict psychological harm or pressure to capitulate in other matters is an abominable form of behavior that causes people to lose their share in the World to Come and justifies jailing them on the Sabbath itself.

The only justification to withhold a get, according to the Posaik, is if the wife has falsely accused and filed charges against the husband and the husband is suffering legal repercussions on account of the filed charges.  And even then, it is only if there is a Rabbinic finding that the charges are false.

In a further discussion, the Posaik delineated one other situation wherein the husband would be justified in withholding the Get and that was when the wife had vindictively kidnapped the children without his assent and began living far away from the husband.  This too, however, may only be done under the advisement of a Posaik or Bais Din and only after rigorous investigation that the facts are correct.

WE NEED A PROTOCOL

What we do need to do, however, is figure out a protocol where neither party is in charge of figuring out which Rabbis or which Bais Din will determine whether the charges are real or false and whether the facts of the vindictive relocation are true as well.  Until then, we should carefully warn both parties that both filing false accusations and causing a wife to be an Agunah are actions that cause the violator to lose his or her share in the world to come.

THE WITHHOLDING JUST FURTHERS THE ALIENATION

This author’s view is that the whole tactic is misguided in the first place.  Withholding a Get just serves to foster alienation.  Has anyone ever heard of a case where a husband refused to give his wife a Get after a protracted period of time – and the children all responded, “Wow, I am so happy that Dad made Mom suffer because now we have such love and respect for Dad..”?

May Hashem relieve the suffering of all parties involved — especially the children caught in the middle.