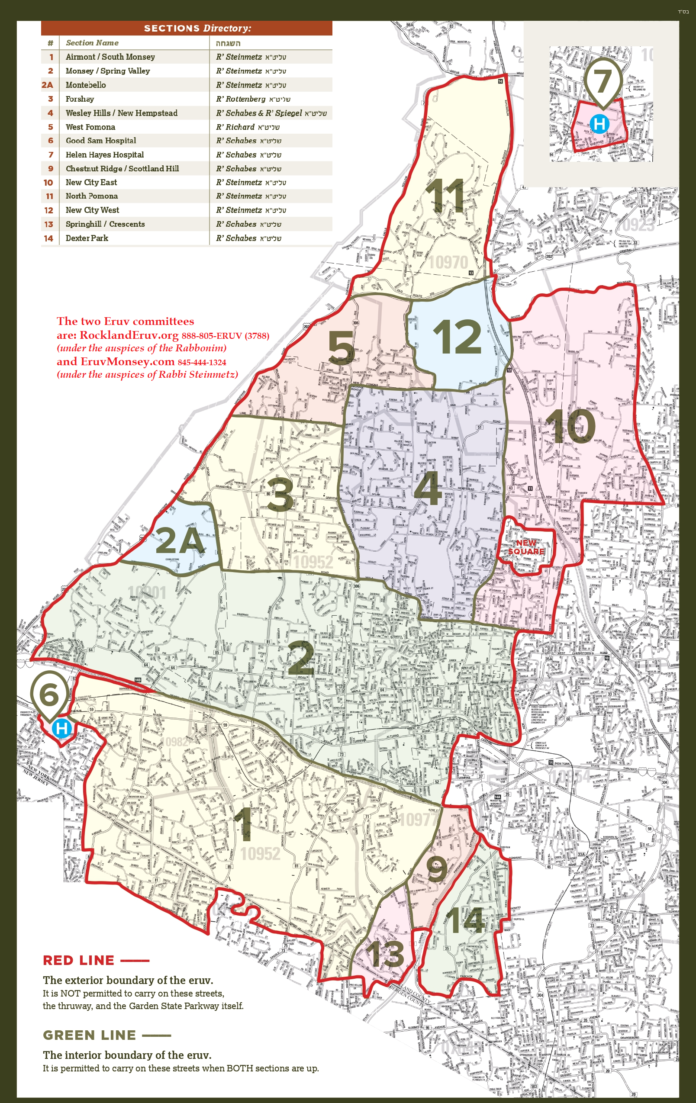 And it happened before Tisha B’Av!

As many residents of Monsey, New York are aware, there are two Eruv committees in the Monsey area, and, of late, there has been some confusion between the two, which has, unfortunately, created some tension. The confusion had spilled over into a number of areas:

• which committee is in charge of which particular sections of the Eruv
• aspects of actual ownership of the Eruv
• An overlapping of who checks what – in regard to the Eruv.
• various aspects of fundraising concerning the Eruv.
• A dispute as to the actual naming and numbering of the various sections also had developed.

There were also attempts at invoking Halachic juridical adjudication of the matter and responses.

[By the way, just as a very important aside – the Eruv across the Hungry Hollow Bridge is actually down – on account of construction. So do not cross that bridge while carrying this Shabbos and until further notice. The Monsey side and the section known as Chestnut Ridge are still intact.]

The fact that there are two committees has also led to considerable uncertainty within the community, with one being called the “Vaad HaEruv of Rockland” or its DBA “Rockland Eruv.” The other Eiruv, under the practical direction of Rabbi Chaim Meir Steinmetz and under the supervision of Rabbi Yechiel Steinmetz is, calling itself, “Vaad HaEiruv Inc.”

Fortunately, however, meetings have been held between the two sides in order to both ease these tensions as well as to make shalom. Of course, not all issues have been completely resolved, but significant steps were taken to ensure that all sides work hand in hand to ensure the kashrus of the Eruvs as well as the peaceful resolution of outstanding issues. There were three steps that were agreed to in the meetings that took place:
1. Both sides would agree to pursue the path of shalom in this misunderstanding.
2. Agreement was made to clearly delineate between the two organizations in terms of the names. This will help clarify misunderstandings and allow both committees to fundraise unfettered.
3. Apologies would be issued for various unfair and inaccurate statements that were made printed and/or distributed on behalf of each respective organization.
4. The numbering and the names of each section of the Eruv – would go back to what it was originally.

“I want to point out the selfless dedication of the Rabbonim on behalf of the entire community, as well as to compliment their desire to sit down and help clear the air on the matter,” remarked Rabbi Chaim Meir Steinmetz who also conveyed these wishes on behalf of his father Rav Yechiel Steinmetz. Leaders in the Rockland Eruv have also expressed appreciation for all of the hard work and effort that Rabbi Steinmetz had made in the Eruv. Both sides should be commended on pursuing these issues in the manner of darcheha darchei no’am – vechol nesivoseha shalom.

There is a remarkable Rashi in parshas VeZos HaBracha (Dvarim 33:5)
“And He was King in Jeshurun, whenever the leaders of the nation were gathered, and the tribes of Israel were together.

Rashi explains: “When Israel is gathered together in a unified group, and there is peace among them, Hashem is their King- but not when there is machlokes among them. — [Sifrei 33:5]”

In other words, Hashem is NOT THEIR KING when there is machlokes. This is an extremely powerful Rashi that generally does not get proper credit – because it is leined on Simchas Torah and everyone, unfortunately, glosses over it.

There is another aspect to it as well. Later in the Psukim, it states: And of shaivet Gad he said: “Blessed be He who enlarges Gad!.. He chose for himself the best, For there is the portion of the revered chieftain, Where the heads of the people come. He executed Hashem’s judgments And His decisions for Klal Yisroel.”

What does all this mean? Why is the tribe of Gad praised so highly? The answer is that, technically, the tribe of Gad was just required to do battle on behalf of the rest of the shvatim after they crossed the Yarden. But shaivet Gad went beyond that – they went lifnim mishuras hadin. They actually led the nation battle!

Shaivet Gad received all of these remarkable praises because they went beyond what was called for. When combined with the aforementioned Rashi – that Hashem is our King – when we have shalom and NOT WHEN WE HAVE machlokes and this insight of how powerful it is when we go beyond the halacha and go lifnim mishuras hadin – what a powerful, powerful, zchus and tool – we have created.

As an example of lifnim m’shuras hadin, let us look at the following example:

The Rebbe of Rav Yisroel Salanter, the founder of the Mussar Movement, was Rav Yoseph Zundel of Salant – a student of Rav Chaim Volozhin. After he had moved to Eretz Yisroel, Rav Yoseph Zundel would learn in a certain Beis Medrash, where he had a heavy shtender filled with seforim.

There was one individual who took a liking to this shtender, and would borrow it taking it across the Beis Medrash. Rav Zundel approached him and said, “Firstly, I give you permission to use my shtender. Secondly, I would like to request that you please always put back the shtender when you are done.”

The person became quite embarrassed and was angry at Rav Yoseph Zundel. In order to pursue Shalom, Rav Yoseph Zundel asked him mechilah. The person was not amenable to do so. Immediately, Rav Zundel arose and announced to all present, “Morai veRabbosai, I erred and caused pain and distress to Reb ___. I publicly ask mechila for what I have done in front of everyone here.”

Tears were streaming down his cheeks. The person forgave him. (HaTzaddik p. 14).
Let’s also not forget that we daven for shalom – three times a day in Sim Shalom in our Shmoneh Esreh. We also daven for it – in every single kaddish that is said. The apogee of the shmoneh esreh is vetov b’ainecha levarech es amcha Yisroel, bechol ais, uvechol sha’ah bishlomecha.

The agenda of Klal Yisroel should be – shalom. These Rabbonim and lay leaders who actually took hours and hours of their time to work out shalom – should be commended. Among them are Rav Chaim Schabes, Rav Ari Levitan, Reb Shragi Lieber, Rav Chaim Meir Steinmetz, his brothers, and a few others who were most instrumental in all of this. Mi ka’amcha Yisroel!