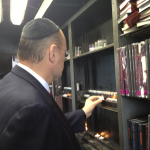 Republican mayoral candidate Joe Lhota knows Bill de Blasio is very popular in the Jewish community, especially in the Orthodox community in Borough Park. But he claims that his underdog status is due to the fact that he’s relatively unknown to the general public.

“If you look at the polls, all of the issues there are Joe Lhota’s issues,” Mr. Lhota said appearing on ‘Community Matters’ Radio program with Leon Goldenberg, Saturday night. “We are doing everything over the next 30 days that my name is out there. That everyone, throughout the city of New York and in your communities, get to know I am. You will understand that I’m more in sync with the majority of New Yorker than my opponent.”

Mr. Lhota went on to paint his opponent, Democratic mayoral candidate Bill de Blasio, as “an extremist at all different levels” that has a “radical message for the future.”

But Mr. Lhota charged that Mr. de Blasio is refusing to agree to more than 3 debates, thus giving him less time to close the gap. He revealed that Mr. de Blasio recently decline to participate in a debate sponsored by the JCRC and UJA. “They said to Bill, pick any date and he still said no. I mean, it’s outrageous, Mr. Lhota said. “You cannot isolate communities by saying ‘No, I don’t want to talk about my vision for the City of New York.'”

“He’s not how he is describing himself as a progressive. He’s an extremist in his positions. That needs to get out there. Many in your community know that,” he added.

Speaking public safety, Mr. Lhota dismissed the notion that there has been a reduction in crime as Stop-and-Frisk stops have been reduced dramatically. “Over the last two months, shootings have gone up. Murders have gone up double digits. In the last 28 days, rape is up 24 percent,” he said. “You got to look at the numbers. Don’t believe what people are saying. The numbers speak for themselves: There has started to be an increase of crime in the city of New York.”

On the issues of school vouchers, Mr. Lhota told the host that although he’s well aware of the difficulties of getting vouchers passed in Albany, his “whole heart belongs to vouchers.” Notwithstanding the hurdle, Mr. Lhota noted that the State Senate already passed a tax credit bill, sponsored by Senator Marty Golden (R-Brooklyn), for parents sending their kids to parochial and private schools. “Speaker Sheldon Silver wouldn’t bring it to the floor in the Assembly,” Mr. Lhota charged. “Had he brought it to the floor of the Assembly, there would be a tax credit program now.”

“I would urge everyone in the Orthodox community to reach out to the Speaker and get his approval of bringing this bill forward, so you can get certain advantages,” he said.

Mr. Lhota also offered some other areas he could help Yeshivas, such as nurses in every schools and school security – participating in a School safety program.

Referring to a more controversial issue – the City’s Commission on human Rights’ lawsuit against 7 stores in Williamsburg requiring a modest dress code – Mr. Lhota said it was wrong to even be made an issue.  “When I go into a private club I’m required to wear a jacket and a tie, same thing in restaurants. You have every right in the world to have this request, having in the various stores in Williamsburg or anywhere else,” he said.

Mr. Lhota went on to contrast himself with Mr. de Blasio on almost every Jewish-related issue, saying he’s “going to ask as many people in the Orthodox Jewish community — directly — for their vote on November 5th.”

Listen to audio of the entire interview here: