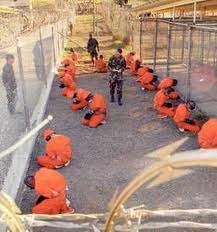 Four years after his failed effort to bring the 9/11 mastermind to New York for trial, President Barack Obama has reinstated the federal courthouse as America’s preferred venue for prosecuting suspected terrorists.

His administration has done so by quietly securing conviction after conviction in the civilian judicial system. Meanwhile at Guantanamo Bay, admitted 9/11 mastermind Khalid Sheikh Mohammed’s case moves at a snail’s pace.

Tuesday’s expected arraignment of suspected al-Qaida member Abu Anas al-Libi is the latest example of Obama’s de facto policy. Al-Libi was captured in a military raid in Libya earlier this month and had been under interrogation aboard a U.S. warship.

The Obama administration says it considers all options for prosecuting terrorists, weighing military and civilian trials on a case-by-case basis.

But Guantanamo Bay, the U.S. military base that embodied America’s post-9/11 methods of interrogating and prosecuting suspected terrorists, has turned into a legal morass. The military commission’s poor case record has become less about winning and more about completion.

While the Justice Department says more than 125 people have been convicted of terrorism charges in federal courts since 2009, not a single military commission has come to a close during that period.

Of the few military commissions completed under President George W. Bush, most resulted in short sentences or have been overturned.

“There’s really no comparison in terms of the success rate,” said David Raskin, the former top national security prosecutor at the U.S. Attorney’s Office in Manhattan. “Not really between wins or losses, just finishing the cases. There’s no comparison at this point.”

The politics are breaking Obama’s way too.

When Attorney General Eric Holder announced in 2009 that Mohammed would be tried in New York City, the outcry from both political parties was great.

Some feared a high-profile terrorism trial would put the city at risk. Others said a civilian courthouse, with all the rights afforded defendants there, was no place for a terrorist.

Obama, who came into office promising to close Guantanamo Bay and prosecute terrorists in federal courts, buckled under the pressure and pulled the case back to Guantanamo.

Since then, not much has changed at the naval base in Cuba. Mohammed is one of 164 men held there and one of six facing trial. Those trials have stalled largely because of legal challenges to the commission system itself.

In federal courts, however, the Obama administration is quietly churning through terror cases and putting many terrorists away for life.

One of the first key cases was against Ahmed Ghailani, a former Guantanamo detainee who was transferred to New York during the Bush administration. He was convicted in 2010 and is serving a life sentence in prison.

Last year, Mohanad Shareef Hammadi, an Iraqi man, pleaded guilty to terrorism charges in Kentucky and was sentenced to life in prison without parole. Hammadi’s co-defendant got a 40-year sentence for his role in a plot to ship weapons and cash to insurgents in Iraq.

Ahmed Abdulkadir Warsame, a Somali citizen accused of helping support and train al-Qaida-linked militants, pleaded guilty earlier this year. Like al-Libi, he was questioned aboard a U.S. warship before being turned over to the civilian justice system.

Each new trial brought fresh criticism from Republicans, but that criticism diminished each time.

Some Republican lawmakers criticized Monday’s announcement that al-Libi would face trial in court. They questioned whether interrogators questioned him long enough.

“It certainly begs the question whether rushing foreign terrorists into U.S. courts is a strategy that is in the best interests of the United States,” said Rep. Bob Goodlatte, R-Va., the chairman of the House Judiciary Committee.

But in the midst of a major budget debate in Washington, the matter got little attention.

The White House, which once fought back against such criticism, now shows little interest in renewing a debate that proved to be a political distraction.

So the administration said nothing when al-Libi arrived in the United States on Saturday. Preet Bharara, the U.S. attorney for the southern district of New York, issued a two-sentence statement Monday, saying only that al-Libi was due in court to answer charges dating back more than a decade.

Al-Libi, whose full name is Nazih Abdul-Hamed al-Ruqai, is accused of helping plan and conduct surveillance for the 1998 bombings of U.S. embassies in Africa.

“A federal civilian criminal trial is by far the safest and the one that would raise the least complex set of legal problems for the administration,” said Steve Vladick, a professor at American University law school.

That’s because al-Libi was indicted more than a decade ago, which meant the government did not need any evidence it gathered against him during his interrogation.

Intelligence officials questioned him for a week aboard the USS San Antonio. Interrogations at sea have replaced CIA “black sites” as the U.S. government’s preferred method for holding suspected terrorists and questioning them without access to lawyers.

Al-Libi’s al-Qaida ties date back to the terrorist group’s early years, according to court documents. That would make him a valuable source of information about the group’s history.

In an interview last week on the PBS program “NewsHour,” Lisa Monaco, the president’s homeland security adviser, said the first priority in capturing al-Libi was to get intelligence.

“I think what it shows is a very clear strategy by the U.S. government to use all the tools, frankly, in our toolbox to disrupt threats, to go after — consistent with the rule of law — individuals who pose a threat, to get intelligence and then ultimately to make a decision about what the best disposition is,” Monaco said.

So far, in every instance that the Obama administration has had a terrorist suspect in custody, it has found the best disposition was the federal court system.