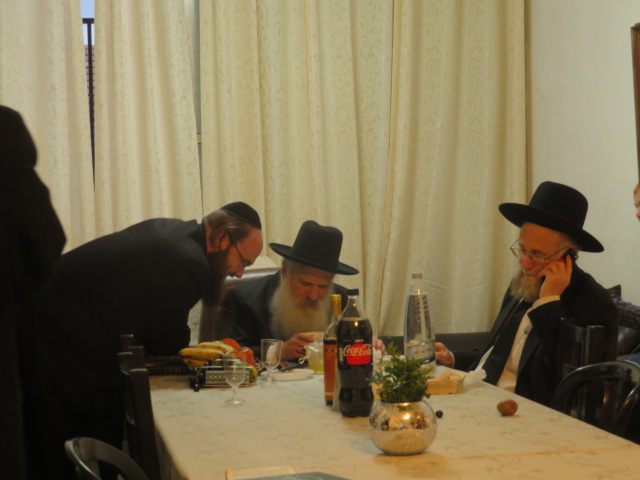 Pictured above is Rav Dovid Schustal, one of the Lakewood Roshei Yeshiva, at the Lessman family home in Bnei Brak, reciting the special Yehi Ratzon on an esrog last Tu B’Shvat.  Were it not for the publication of a certain sefer 400 years ago – this picture would not exist.

In the 17th century, Tu B’Shevat underwent a metamorphosis because of the publication of a new mystical and Kabbalistic work, Chemdas Yamim. Its origins are somewhat obscure. It was printed anonymously, and its publication caused the Tu B’Shevat revolution.

What does the term “Rosh Hashanah” in this context mean? We often associate Rosh Hashanah with the Day of Judgment. But are trees actually judged on this day?

The consensus of rabbinic thought is that there is a Rosh Hashanah for trees, but it is not Tu B’Shevat — it is Shavuos. The Gemara in Rosh Hashanah (16a) states clearly that trees are judged on Shavuos. This is also how the majority of commentators understand this Gemara.

It is more like a fiscal year, the beginning of the year. In regard to all mitzvos associated with trees, Tu B’Shevat begins the new year and ends the previous year. Ma’aser, for example, cannot be taken on fruits from one year to the next year. The same is true for the laws of orlah; until it sees its third and fourth Tu B’Shevat (with one other proviso according to the Rambam) it is still forbidden to be consumed.

The laws of terumah and shvi’is are also affected by the date of Tu B’Shevat. In short, it is a technical Rosh Hashanah, the date that is crucial for all the agricultural halachos.

This approach, however, is not so simple. The Shulchan Aruch rules (O.C. 572:3) that a community that wishes to establish a communal fast on a Monday or Thursday that happens to fall on Tu B’Shevat should push off the fast until the next week. The Shulchan Aruch references the Hagaos Maimonius, but the question was first posed to Rabbeinu Gershom Meor HaGolah.

Another halachah brings out this point as well. A chassan should not fast on his wedding day if it falls out on Tu B’Shevat (See Mishnah Berurah 573:7).

If it is only fiscal, then why do we not fast? The answer is that there must have been some dimension of ruchniyus, spirituality, here.

The Magen Avraham (131:16) writes that the minhag among Ashkenazim is to eat fruits of trees on this day.

Throughout the Rishonim and the early Acharonim, only these three halachos were mentioned.

Then, historically, a bombshell erupted. The sefer Chemdas Yamim, an anonymous Kabbalistic work written in the late 17th century on mystical aspects of Shabbos and the yomim tovim, appeared. It was not limited to mysticism. It mentioned halachah, mussar, and many of the minhagim of the Arizal.

Initially, the great Acharon Rav Yaakov Emden believed that it was written by a follower of Shabtai Tzvi. Since then, however, it has been accepted by many various groups in Klal Yisrael. Chassidim and Sephardim use it as a source for many Kabbalah minhagim.

This sefer has in it something called the “Tu B’Shevat Seder” (see Vol. 2, Shovevim Ch. 3, p. 108–110), which has become very popular among many various groups of Jews. Indeed, a whole seder of events was described with pesukim recited for each of some 30 different fruits.

Sefer Chemdas Yamim was originally published and edited in 1732 by the great Rabbeinu Yaakov ben Yom Tov Algazi, the father of the Maharit Algazi, who was a friend of the Chida. This gave the sefer great credibility and authenticity. The hesitations of Rav Yaakov Emden were soon forgotten.

Whether or not they were to adopt the Tu B’Shevat Seder (most people did not), the Chemdas Yamim pointed the way for the great Baalei Machshavah to see and describe the spiritual essence of Tu B’Shevat.

The author of the Chemdas Yamim was unaware of something that was to be discovered in the late 1800s in Egypt. This was the Cairo Genizah, where well over half a million items placed in shaimos in a shul in Cairo for over 1,000 years were discovered. In the Cairo Genizah were special piyutim (hymnal prayers) that were apparently recited with the Shemoneh Esrei in Eretz Yisrael during the times of the Gaonim.

What were in these piyutim? They described a spiritual dimension to Tu B’Shevat that clearly demonstrated to all that Tu B’Shevat was a deep spiritual experience for the Torah community in Eretz Yisrael.

Unfortunately, the Eretz Yisrael of Eretz Yisrael’s Gaonim was soon to be utterly destroyed with the advent of the Crusaders. Jewish blood flowed in the streets like rivers. Those Jews were viciously murdered. It seems, however, that some remembrance of the “holiness” practices remained with Ashkenazic Jewry.

So what was the spiritual dimension of Tu B’Shevat? Where did the holiness emanate from? What is it that these three halachos allude to?

The Apter Rav, zt’l, author of the Oheiv Yisrael (end of Parsahas Shelach) (1748–1825), explained that the month of Nissan is when the Jewish nation will ultimately be redeemed in the future. Forty days or so before this time is an “aschalta d’geulah,” an awakening of the time of bias haMashiach, the arrival of Mashiach.

Chazal, therefore, established this time as a holiday with aspects of the sparks of the redemption that will occur in Nissan. It is this day, Tu B’Shevat, which is imbued with the holiness of the aschalta, beginnings of the geulah.

Therefore, all the halachos of terumah, ma’aser, and orlah will begin on the day imbued with the holiness of the impending redemption.

Even though the redemption did not yet occur, the holiness is still inherent in the day. The Klausenberger Rebbe points out (Derashos 5741) that Avraham Avinu baked matzos on the day of Pesach even before it happened, according to the Midrash (B.R. 48:12). Why? Because the holiness is part of the very day, even before the events transpired. The same is true for Tu B’Shevat.

We may ask, however, why is there a special minhag of eating the fruits of Eretz Yisrael on this day? And what is the deeper connection between the Rosh Hashanah for trees and the future redemption?

We find in the Mechilta (Beshalach chapter 3) that Rabbi Yishmael tells us that the Red Sea was split through the merit of Yerushalayim. At first glance this seems bizarre. What does the redemption from Mitzrayim have to do with Yerushalayim?

The Midrash tells us (Esther Rabbah 1:9) that Yerushalayim is the way that Eretz Yisrael is often referenced because it is the center of Eretz Yisrael. The Mechilta is telling us that the merit of Eretz Yisrael brings about geulah, redemption.

The Centrality Of Eretz Yisrael

It would seem that these are the reasons for our halachic minhagim as well. We eat the fruit of Eretz Yisrael on Tu B’Shevat so that the aschalta of the geulah will materialize through the merit of Eretz Yisrael.