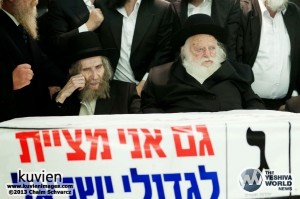 In response to the call from gedolei hador in Bnei Brak Shlita, 53,208 eligible voters in Yerushalayim voted for Yahadut Hatorah in the municipal elections. There were a total of 218,053 votes in the Jerusalem race.

Approximately 7,500 seats went to Chaim Epstein and the Bnei Torah party, resulting in one council seat.

In other heimish election news;

· Ashdod: Yahadut Hatorah went up from three to four seats.

· Betar Illit: Meir Rubinstein will continue as the city’s mayor. Degel, Agudah and Shas earned a combined 12 seats on the city council.

· Charish: Rabbi Yitzchak Keshet was elected to head the municipality.

· Emanuel: Rav Ezra Gershi was elected as head of the local council for a second term.