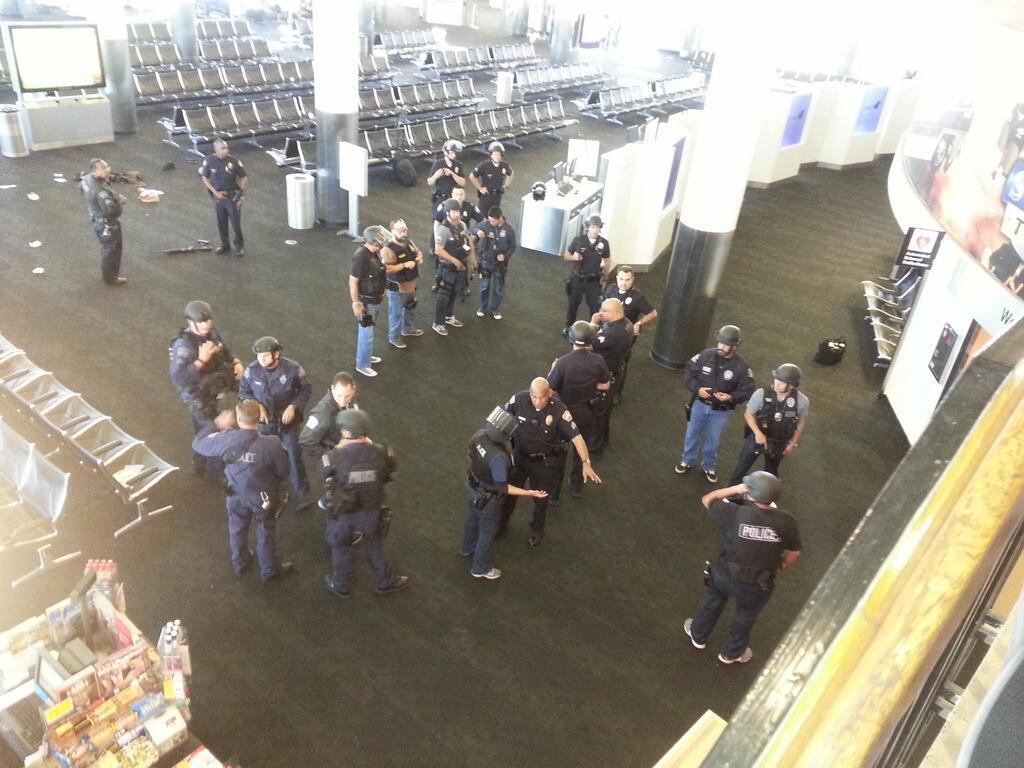 UPDATE 2:20PM EST: The gunman who allegedly opened fire at LAX Friday morning, killing a TSA agent, is dead, law enforcement sources told the media. No further details were available about his wounds. Law enforcement sources said investigators are trying to determine whether the gunman worked at LAX. Los Angeles Police Department anti-terrorism officials are on scene. But sources said they don’t believe the suspect was tied to any known terrorist groups.

UPDATE 2:20PM EST: A federal law enforcement official said that a TSA officer was shot and killed at a passenger screening checkpoint at Los Angeles International Airport. Three or four other TSA employees were injured in the shooting, the official said. A suspect was in custody, the official said. The LAPD has taken control of the investigation and the crime scene, the official said. At this stage, the suspect does not seem to have a connection to a terrorist organization, and investigators were working to determine the motivation for the attack.

UPDATE 1:36PM EST: A White House official: “The President has been briefed about the shooting at LAX. We will continue stay in touch with our federal and local partners. The LAPD is leading the response and investigation.  We urge citizens to listen to the authorities and follow directions from the first responders on site. The President will continue to receive briefings throughout the day.”

UPDATE 1:10PM EST: The LAPD is on a citywide tactical alert.  The LAPD would confirm only that two people were injured and that the suspect was in custody. LAPD Commander Andy Smith said “multiple shootings” occurred and that officers are still sorting out how many people were hurt.

UPDATE 1:09PM EST: A man armed with a rifle opened fire at Los Angeles International Airport, leaving several people wounded. Law enforcement sources told The Times that at least one Transportation Security Administration agent was shot. Law enforcement officers are flooding the airport and Terminal 2 and 3 are being evacuated. Tory Bellecci, of the television show Mythbusters, tweeted: “Heard gun shots then everyone starting running for the door. Not sure if anyone was hurt. #LAX.” TV footage showed dozens of officers swarming the airport. Images also show a law enforcement officers being treated by paramedics. He appeared to be alert. Another officer had a bloody hand. 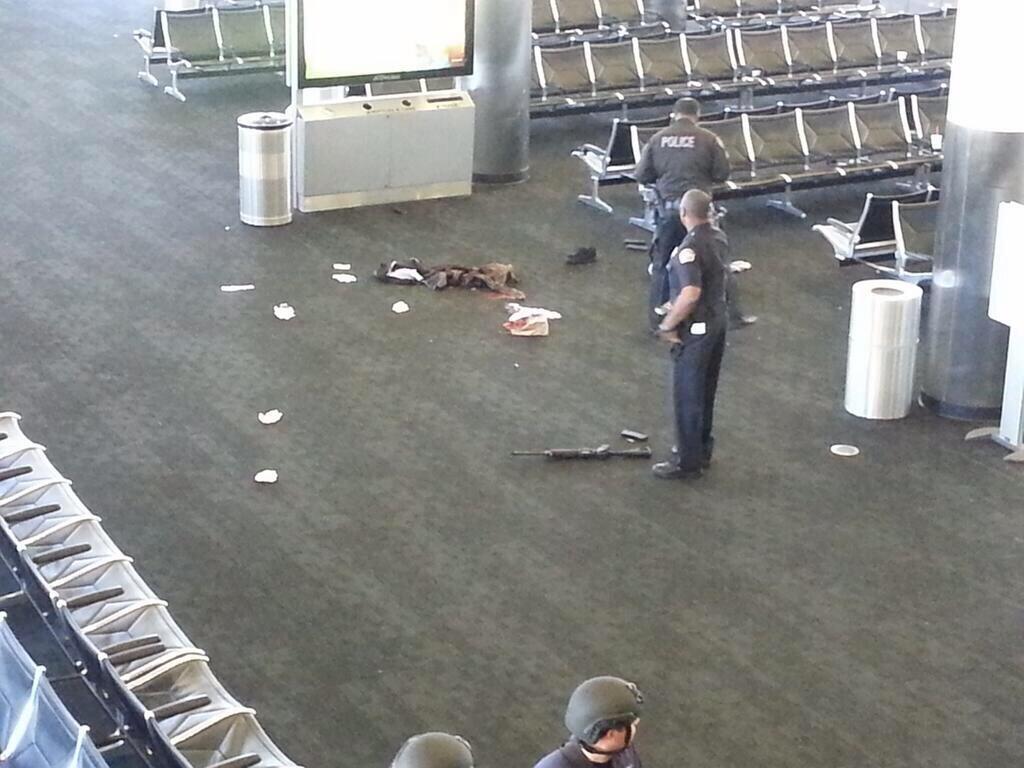 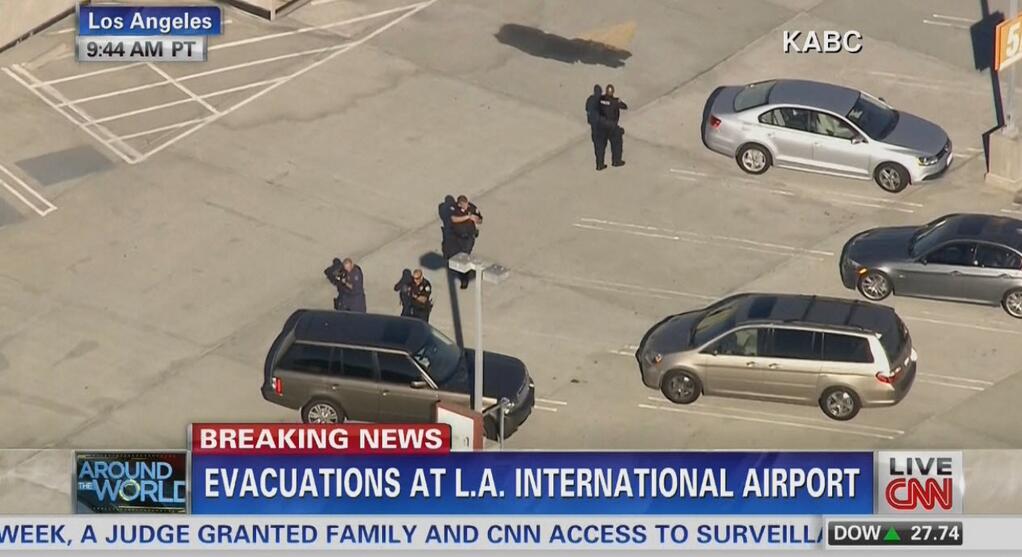 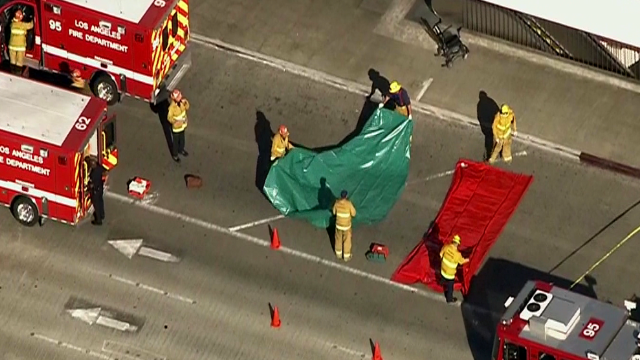 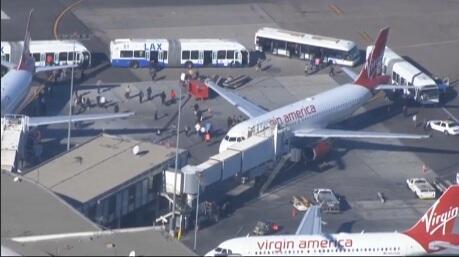 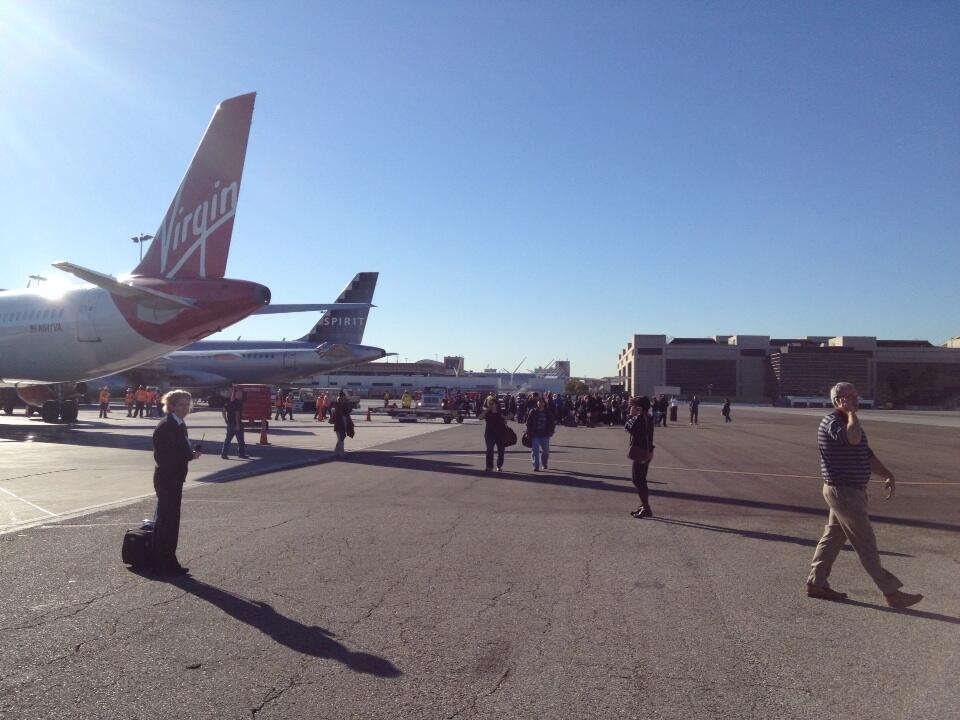 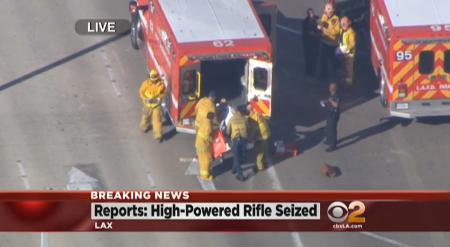 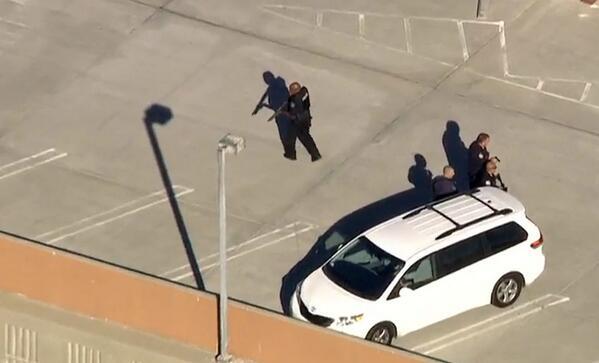 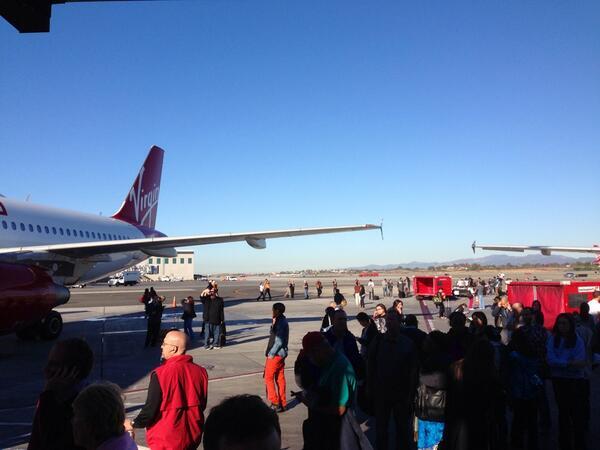 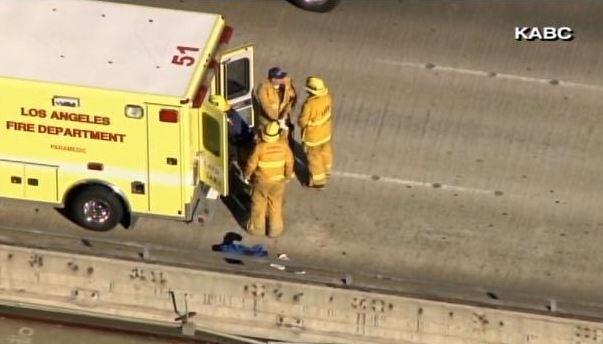 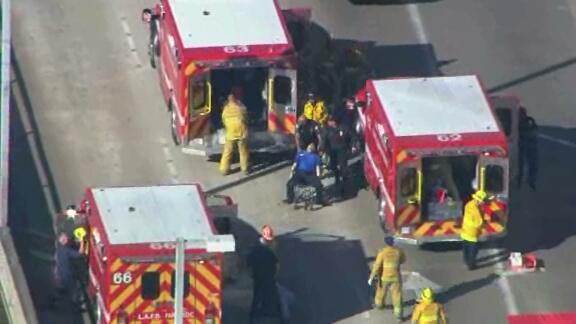 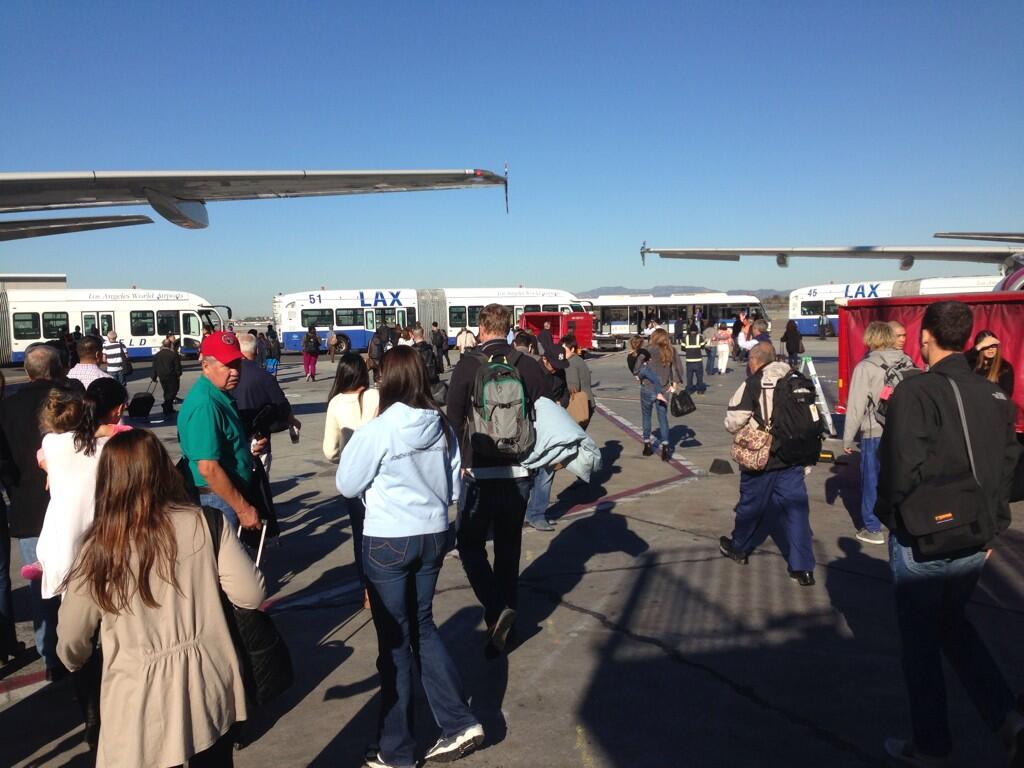 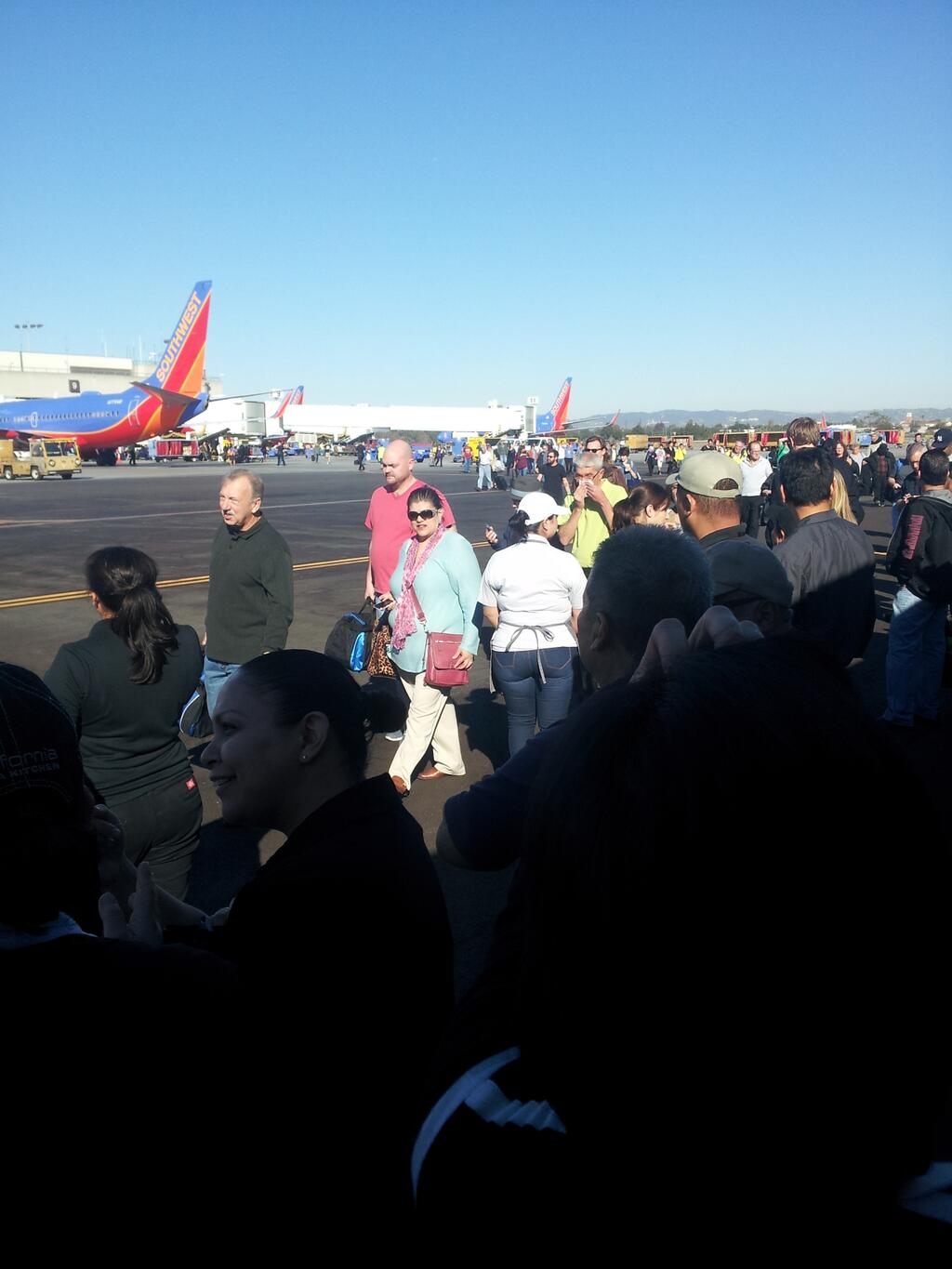 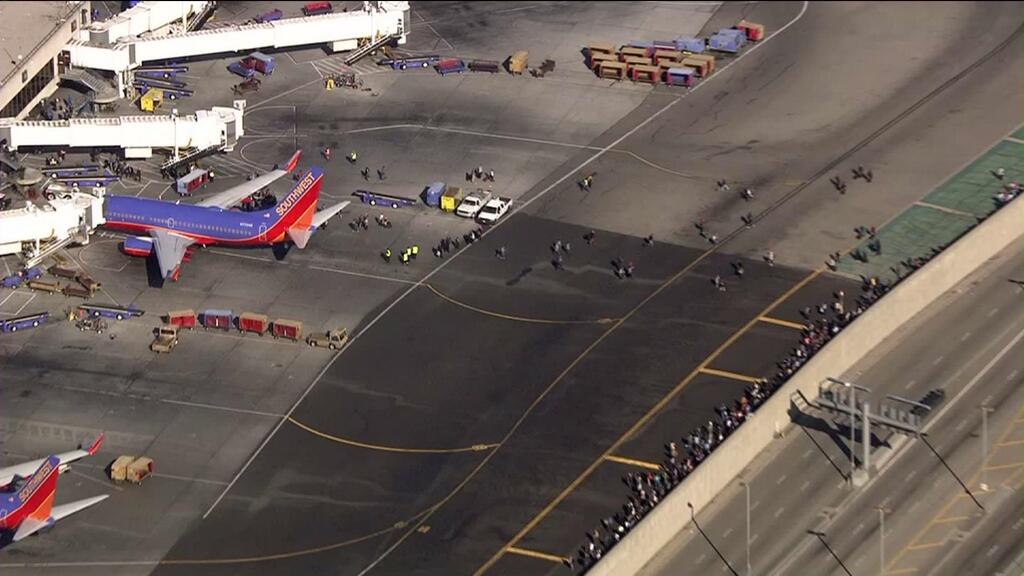