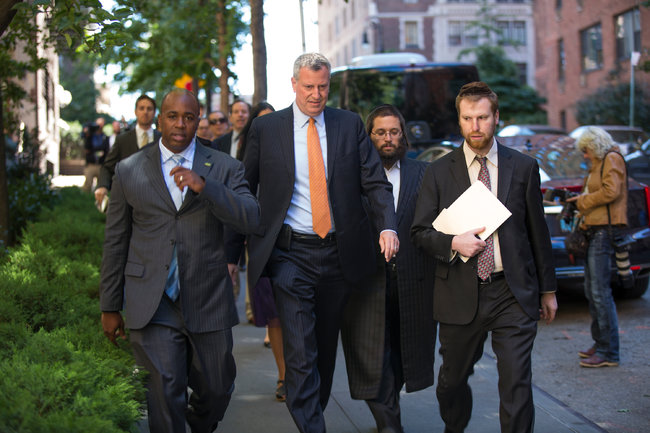 Democratic mayoral candidate Bill de Blasio is on course of making victory on Tuesday night by being elected as the first mayor for decades that was brought up and lives in Brooklyn. As a matter of fact, Mr. de Blasio’s public service started in Brooklyn when he was elected to the City Council in 2001, having the honor to represent parts of Borough Park as councilman.

Mr. de Blasio is no stranger to the Jewish community, as well as to the pro-Israel community in New York. As an advocate for Jewish causes, Mr. de Blasio has earned many friends in the community that has helped him to garner the support he needed to win the Democratic primary and ultimately, according to public opinion polls, the general election on Tuesday night.

But Mr. de Blasio is not a man alone. With the relationships that he had maintained over the years in government and with loyal staffers who hopefully will continue working for him in the mayor’s office, many in the community believe that there will be an open door in City Hall and that the community will be best served under a de Blasio administration.

Two of the individual that have earned the trust of the Public Advocate and the community alike are: Avi Fink and Pinny Ringel.

Avi Fink is the son of Rabbi Reuven Fink, Morah D’Asra of Young Israel of New Rochelle (YINR) since 1981, and the grandson of Rabbi Samuel Fink, Rav of Young Israel of Bedford Bay. “Coming from such an illustrious background, Avi brings forth eloquent leadership skills and dedication which was evidenced in the past congressional campaigns he ran,” Ami Magazine writes in a profile of Mr. de Blasio and his associates. Fink was chief of staff to State Senator Toby Ann Stavisky; he served as director in Anthony Weiner’s district office, handled the campaign of Councilwoman Elizabeth Crowley for Congress and is currently deputy chief of staff in the public Advocate’s office and a senior adviser to Mr. de Blasio’s mayoral campaign.

Fink is also very active on Social Media, a tool used by the campaign to interact with voters and to deliver the message across the board.

Pinny Ringel, a prominent Belzer Chusid and a political operative for over a decade, is a Community Affairs Associate in his current capacity in the Public Advocate’s office. But since Mr. de Blasio declared his candidacy for mayor, he’s been voluntarily active in the campaign, serving as a right hand to Mr. de Blasio and has vigorously been advocating by outreaching to the Orthodox Jewish community in Brooklyn.

According to Ami Magazine, before embarking in the mayoral campaign, Pinny received a bracha from the Belzer Rebbe, Shlit’’a: “You should be Nosei Chein (find grace) in people and may your chassidish levush (Hasidic attire) serve you well!”

To prove Mr. de Blasio’s respect to Jewish tradition and his respect to Pinny, several sources have confirmed with YWN that there’s one hour in the day that Mr. de Blasio and his office knows not to disturb Pinny: During his daily – late night – hourly shuir.

At several Jewish events recently, Mr. de Blasio hinted that Pinny would serve in a high capacity position, if elected mayor of New York City. A source, who spoke to YWN on the condition of anonymity, said that Mr. de Blasio was told by some prominent community leaders that Pinny Ringel is the guy who they trust will be an effective public servant and the perfect right hand man for the mayor as a representative of the community.

Since 2001, Pinny has earned only praise for his devotion and bi-partisan efforts to advocate for the community’s needs. He worked with then councilman and now Senator Simcha Felder and former Senator David Storobin. He also maintained a good working relationship with Assemblyman Dov Hikind, Councilman David Greenfield and the leadership of Agudath Israel.

A well deserved yasher koyach to @Pinnyringel on rallying the Jewish community for your candidate!

While the cmapaign declined to make Avi and Pinny available for an interview, it is believed that the loyalty they have shown and their devotion over the years to serve the public will earn them a seat at the table, to serve as a bridge between the various Jewish communities and the mayor’s office.