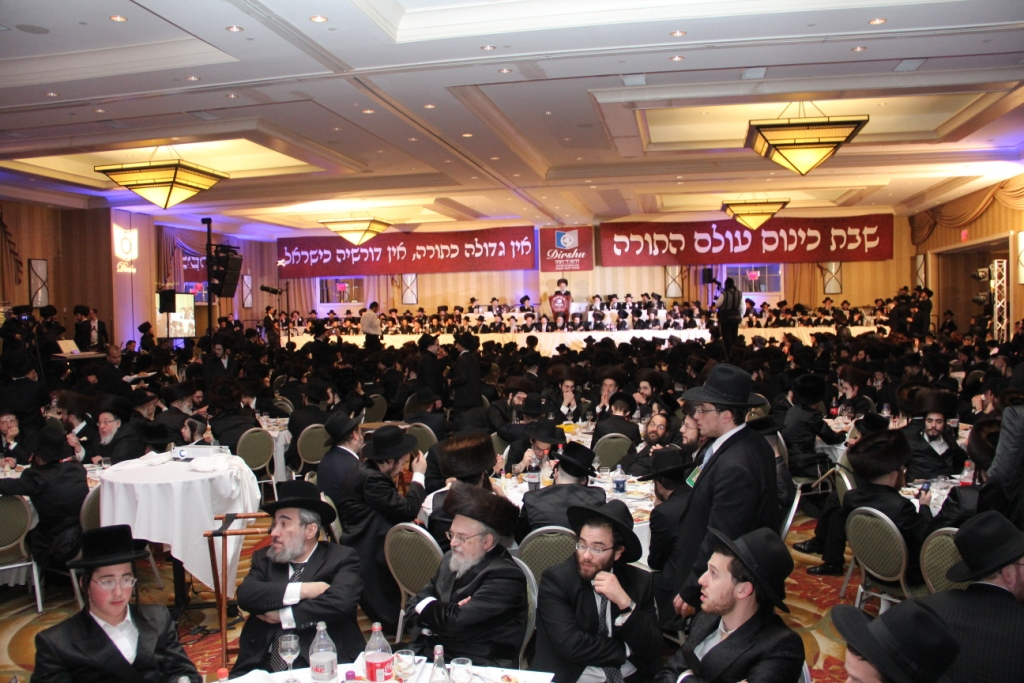 “In Eretz Yisrael, they are conspiring against lomdei Torah, seeking to degrade them and disgrace all that is holy to our nation.”

Rabbanim and Roshei Yeshivos in Eretz Yisrael in a written appeal to Rabbanim in the USA: “To whom can we turn at this time if not to our brothers in the Diaspora to help us bear the yoke of Torah and support lomdei Torah?”

American Jewry has united in its support of lomdei Torah and conveyed a unanimous message of chizuk to the Torah community in Eretz Yisrael. This coming Shabbos, hundreds of Roshei Yeshivos and Gedolei Torah, dayanim and Rabbanim will convene for Dirshu’s annual Kinus in New Jersey, with one of the main topics on the agenda being promoting Torah study throughout the world and supporting avreichim in Eretz Yisrael during this period of incitement and cruel edicts against lomdei Torah.

Rabbanim from kehillos across America will join together for an inspirational Shabbos at Dirshu’s Olam HaTorah Annual Convention, and many others have dispatched their bracha and chizuk to lomdei Torah, strongly condemning the anti-Torah government policies in Eretz Yisrael.

Rosh Yeshivas Mir HaGaon Rav Aryeh Finkel, shlit”a, wrote, “In Eretz Yisrael, ‘those who despise [Torah] raise their head’ to oppress and subjugate lomdei Torah and bnei hayeshivos, stepping harshly upon the heartstrings of our nation’s soul. It is thus the obligation of one and all to bear the yoke, strengthen oneself and increase one’s Torah study and prayers so that the horn of Torah shall rise and the nation of Hashem will be glorified throughout the world.”

The Vizhnitzer Rebbe, shlit”a, wrote:  “There is no Torah like the Torah of Eretz Yisrael at a time when evildoers rise against us to thwart the steps of Torah from penetrating the Palace of the King. To whom will we turn at this time if not to our brothers in the Diaspora to help us bear the yoke of Torah and lomdei Torah?”

Hagaon Rabbi Yitzchak Scheiner of the Moetzes Gedolei HaTorah wrote in his letter: “I praise and commend the growth of the Daf Yomi B’Halacha program that Dirshu promotes throughout the world. Particularly at this time when our holy faith is being pursued and trampled in Eretz Yisrael, it is vital that every person undertake to strengthen himself in learning.”

The Sanzer Rebbe, shlit”a, adds in his letter, “I call upon the tzibbur to fortify themselves at this time in learning Torah and halacha, particularly in this period of tzara when the honor of Torah and talmidei chachamim is being trampled in Eretz Hakodesh. This is surely the time to strengthen ourselves in learning and prayer, so that the Torah and Yisrael should be elevated and glorified.”

Moetzes Gedolei HaTorah member and Rosh Yeshivas Chevron-Knesses Yisrael Hagaon Harav Dovid Cohen, shlit”a, inscribed, “At this time, many are conspiring against lomdei Torah in order to humiliate them, mock them, debase them and harm the supreme, eternal value of limud Torah and toiling for Torah. This Kinus grants tremendous chizuk to glorify and pay tribute to those who toil for Torah.”

Hagaon Rabbi Shalom Cohen of Moetzet Chachmei HaTorah sent the following message, “Especially in this time when Am Yisrael is demoralizing lomdei Torah and harming all that is holy to our nation, we must fortify ourselves in Torah and tefilla that the Torah shall be elevated ever higher.”

The Kinus is scheduled to take place this coming Shabbos in New Jersey, followed by Dirshu’s Olam HaTorah Annual Convention which will be attended by hundreds of Rabbanim and Torah community leaders throughout the USA. The keynote element of discussion will be promoting and fortifying Torah and talmidei chachamim.

“American Jewry will join together in splendor on behalf of lomdei Torah and pay tribute to talmidei yeshivos and avreichim. It will thus be known that world Jewry is united in its commitment to strengthen the Torah world, especially during these difficult days in Eretz Yisrael,” say Dirshu administrators who orchestrated the upcoming gala event.