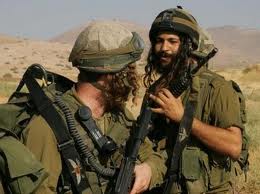 If Chief of Personnel Branch Major-General Orna Barvibai continues as planned, some prominent religiously right-wing dati leumi rabbonim may instruct their talmidim not to serve while the more liberal dati leumi community will find a way to make it work. This will result in the IDF losing some of its finest combat soldiers and officers as well as causing a major split in the dati leumi community.

The recent liberal dress code for females during phys-ed is one of the red lines along with increased integration of the genders.

MK (Bayit Yehudi) Yoni Chetboun, a major in the reserves and a member of the Knesset Foreign Affairs & Defense Committee is quoted by BaSheva telling of an incident that is engrained in his memory. The incident occurred in an armored personnel carrier in the Gaza area about seven years ago. He was in the APC with his troops, all men with the exception of a female paramedic, when she announced she must relieve herself. Chetboun explained such a cramped environment is not designed to be coed, and it was clear to him he could not entertain permitting her to leave the armored vehicle due conditions outside.

The wise commander managed to put up an improvised sheet and she was able to take care of her needs while they were under fire. Chetboun explains the situation is avoidable as women have no place aside the male combatants. Anyone who was even in an APC can understand the complexity of that situation. Chetboun hopes to meet with IDF Chief Rabbi Brigadier-General Rabbi Rafi Peretz to learn firsthand what changes are planned.

He comments that of late one can feel the influence of women’s rights organizations on the IDF and for him; the highest value is to maintain a winning army. He feels the infusion of women throughout the IDF is a bad idea, religious issues aside, and unfortunately, the matter of women’s rights today is a bigger issue than maintaining an elite capable IDF.

Rabbi Druckman explains Barvibai is acting unilaterally, not including the IDF Chief Rabbinate, him or others, simply bulldozing the religious status quo in the name of advancing women’s rights in the IDF. “No one asked us, told us or consulted with us” Rav Druckman told BaSheva, explaining what he knows was leaked to him and others.

Major-General (retired) Yiftach Ron-Tal was the commander of ground forces when Rabbi Druckman and others formulated the rules eleven years ago. Those rules today permit religious soldiers and officers exist in the military and Ron-Tal questions the sudden change.

Ron-Tal explains that back in the day he was nothing less than shocked to see the absolute ignorance of members of the General Staff when it came to matters of Yiddishkheit, tznius and kashrus. A committee was created including Rav Druckman, Ron-Tal, as well as representatives of hesder yeshivot and mechinot yeshivot. With patience and mutual respect they hammered out the rules that exist today, the rules that Barvibai appears comfortable discarding without consulting with anyone.

Ron-Tal explains the difference is back then, “There was a genuine desire by all parties to reach a workable understanding that was mutually acceptable”.

Rav Druckman’s anger and concerns are echoed by former IDF Chief Rabbi Avichai Ronsky, who questions why the military is jeopardizing losing the backbone of its combat fighting force. Rav Ronsky today serves as rosh yeshiva in Yishuv Itamar. Ronsky feels there are those who are inciting, seeking to scare the nation by warning the military is being taken over by the religious. It is clear to all that today; there are more kippa-wearing combat officers than in the history of the IDF and the graduates of the first mechina yeshiva some 25 years ago are now wearing the rank of colonel.

For some it is clear, the fact that there are religious Zionist colonels is reason for panic, and these folks will do whatever it takes to prevent too many religious officers from reaching the control level of the military. For them, a religious General Staff is their worst nightmare. While the religious Zionists have truly sacrificed in their military service, all of the discipline and exemplary service does over the years will do nothing against the Hellenists whose biggest fear is a religious chief of general staff.

Rabbi Moshe Hager, a colonel in the reserves and head of the Mechinot Union representing the mechinot yeshivot around the country blames the feminist organizations and others who feel the religious Zionists are becoming too influential.

For Rav Hager, the army is a place for everyone and one who is willing to work hard and excel will advance, rejecting allegations of gender discrimination.

Rav Hager warns if the IDF continues on its current path it will become an unfit environment for moral persons, religious and non-religious alike. He explains there is no place in a moral army for men and women to be at one-another’s side under such conditions, adding such a situation hampers the performance of the men. He warns the continued acquiescence to the feminists and left-wing organizations will result in the military losing the cream of the crop. Hager says “The IDF must do what is best for the IDF. In addition, we send many soldiers to serve and we should and must have a say in the decision-making. No one is consulting with us here.”

Ron-Tal explains before the committee placed today’s rules into place officers did not understand a soldier legitimately wanted to daven in the morning. It was always assumed he was just trying to get out of doing one chore or another. He explains the rabbonim taught him and others, and history has proven them correct. He reflects to back then, adding that after he reached agreement with the rabbis he realized he needed some heavy weight backing to bring this to the next stage. He maintained a relationship with Rabbi Mordechai Eliyahu ZT”L and he arranged to visit with him and Rabbi Avraham Kahane Shapira ZT”L together with then Deputy Chief of Staff Major-General Moshe Ya’alon, who serves as defense minister today. With the bracha of the chief rabbis in hand the two senior commanders felt comfortable moving ahead.

They next hurdle explains Ron-Tal was the Knesset Committee for the Advancement of Women headed by Yael Dayan. He was wise enough not to mention his meeting with the chief rabbis to the extreme left-wing MK, and unaware of the influence of rabbonim in the process, the ultra-secularist MK gave her stamp of approval.

Armed with all of this, the two then brought it to the final stage and it has been a part of the military rule book since.

Prominent dati leumi rav/posek Rabbi Tzefanya Drori Shlita, who is also Chief Rabbi of Kiryat Shmona and rosh yeshiva of the city’s hesder yeshiva feels “the dati leumi community has been asleep at the wheel” to permit this to get as far as it did. The elderly rav points out that IDF Chief of Staff Lt.-Gen. Benny Gantz has been a friend and he hopes the commander will intervene before it is too late.

Director-General of the Hesder Union Eitan Ozeri warns that if chas v’sholom what is taking place continues, it will undoubtedly have a profound negative impact of the service of religious soldiers and especially officers.

Some rabbonim blame the IDF Chief Rabbinate and its head, Rabbi Peretz, while others cite he is a victim as is Rav Druckman and many others. Some point out that Rav Peretz is not perceived as strong, adding an officer like Barvibai would never had tried this on Rabbi Yisrael Weiss’ or Rabbi Avichai Ronsky’s watch, for they maintained a strong IDF Rabbanut which was uncompromising on matters of Yiddishkheit while Rav Peretz has been too laid back and willing to accept what comes his way.

They feel that Rav Peretz’s laid back get-along-with-everyone attitude began with the issues of kol isha and has now led to this.