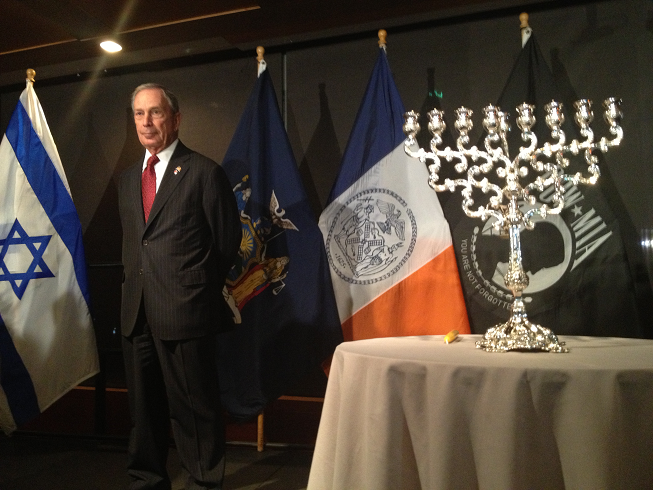 [VIDEOS IN EXTENDED ARTICLE] Mayor Michael Bloomberg hosted his final Chanukah Party as mayor of New York City at the Jewish Heritage Museum Monday evening, and as such he combined the three occasions – Chanukah, Thanksgiving and the end of his 3rd term as mayor to reflect on his legacy, leaving the next mayor a safer and healthier City.

Bloomberg also said he’s looking forward visiting Israel next spring to accept the $1 million Genesis Prize at a special ceremony in Jerusalem by Prime Minister Benjamin Netanyahu. “For some reason that nobody can figure out — at least I can’t — I will be honored to receive the first Genesis Prize,” Mr. Bloomberg said in a humble manner.

As the prize might not impress Mr. Bloomberg, whose fortune is estimated as $40B, he told the crowd he had told the Prime Minister of his intention to use the $1 million “to promote commerce between the people in Palestine and the people in Israel.”

“We have to find some way that everybody can get along in that space or it won’t end nicely for anybody,” he said.

Following the Mayor’s brief remarks, Rabbi Joseph Potasnik was called up to light the shames — which Bloomberg called “shema” — and to lead the brochos. Mr. Bloomberg mumbled along the blessings recited before lighting two candles of 6 and sang along ‘Maoz Tzur’ transcribed in the iPad he so dearly held on to.