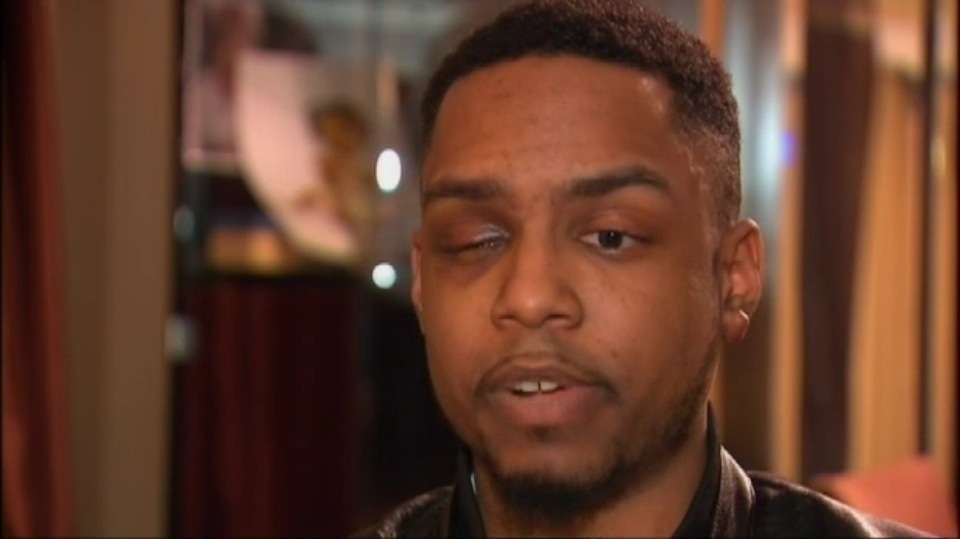 A black fashion student claims he was brutally attacked by a gang of Hasidic men who shouted anti-gay slurs at him while he was walking through Williamsburg after a night of partying, the Daily News reports.

According to the victim, Taj Patterson, 22, he was headed home to Fort Greene around 4:30 a.m. on Dec. 1 when he says more than a dozen ultra-Orthodox Jewish men began assaulting him on Flushing Avenue.

“I’m walking down some block by myself and then the next thing I know, I’m surrounded by a group of Hasidic Jewish men and they’re attacking me,” Patterson recounted to the Daily News. “I was alone. I was an easy target. I’m black. I’m gay, a whole slew of reasons.”

Paterson said he remembers the ringleader. “There was a crowd around him, cheering him on and getting him rowdy, and he would grab me and push me against the wall.”

Evelyn Keys, an MTA bus driver, came to Paterson’s rescue as she was rounding the corner of Flushing Ave. and Spencer St. when she saw the horrific attack unfold before her eyes, according to the Daily News.

“I get out of the bus and all these men were standing up straight around him,” Keys Told the Daily News. “Taj is laying down on his back. I went up to him and he was in so much pain. He says, ‘I can’t see . . . I can’t breathe.’ ”

He was rushed to Woodhull Hospital with a broken eye socket, a torn retina, blood clotting, and cuts and bruises to his knee and ankles, according to the Police report. He was “highly intoxicated, uncooperative and incoherent,” after the assault.

Paterson is expected to undergo surgery to reattach his retina.

In an interview with NBC4, Patterson said he has no idea why he was beaten up.

“Maybe the way I dressed, I was on the block,” he said. “I want these people to know they can’t put their hands on anyone and get away with it, and think just because you have on certain attire you can get away with certain things. We’re all equal here.”

The NYPD confirmed Monday night that the hate crimes unit is investigating the assault.

Reached for a comment as a vocal leader against Hate attacks, Assemblyman Dov Hikind told NBC4 “something obviously happened” to Patterson, but the allegation was “bizarre.”

It “sounds so out of character,” Hikind said.

“I am thoroughly shocked and deeply troubled by this appalling attack. Acts like this have no place in our society and our community will not tolerate them. The NYPD Hate Crimes Task Force is currently investigating this crime and I have full faith and confidence that they will pursue every possible lead to ensure that justice is done, and I will do everything I can to assist them.”

UPDATE 4:40pm: Police Commissioner Ray Kelly told reporters there have been no arrests made in the case yet. “There may have been some sort of commotion on the bus,” Kelly said. “It’s reported that a group with some sort of uniform jackets with a logo on it may have been involved.”