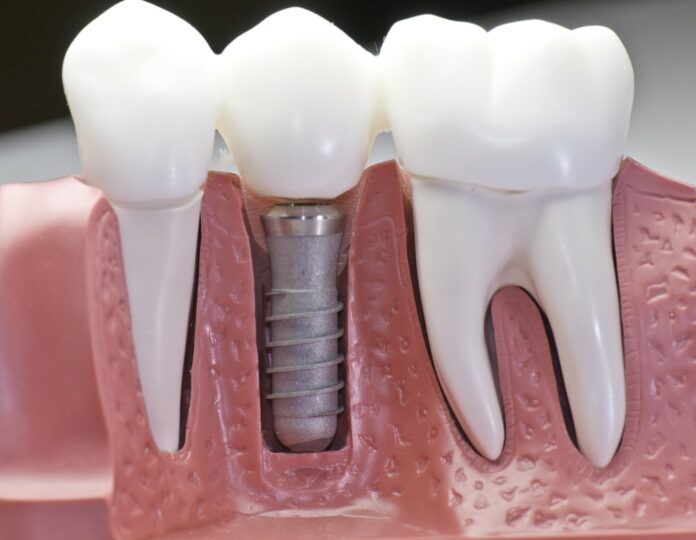 Dedicated in honor of Dr. Mutty Weitz, of South Island Periodontics, a fine periodontist – by all accounts

Pretty much all advances in technology, bring on new questions in halacha.  Dental implants are no different.

The halachic questions abound.    Reuvain slugged Shimon in the face and knocked out a tooth – does he have to pay for Shimon’s implants?  Does a husband halachically have to provide implants for his wife? Can he opt for dentures? What if an implant fails or gets messed up.  Are there halachic obligations on the periodontist?  Are the temporary screw and temp tooth considered a chatzitzah regarding the laws of Mikvah?  Also, what is the halacha on Shabbos?  Is doing an implant considered “Boneh – building on Shabbos?”

THE ONE DAY – ALL-IN-ONE PROCEDURE

Perhaps the most recent advance in implantology is the ability to do the extraction and the implant and the temp tooth at the same time.  True, it takes 3 months or more to fully heal, but who wants two operations, when many times three appointments can be combined into one?  How does this affect the aforementioned halachic questions?

What follows is a short overview of the halachic dimensions involved.  Of course each situation may be different and one should consult his or her own Posaik when it comes to a final ruling.

Let’s get to Reuvain and Shimon. Rabbi Meir Schwadron in Bais Aharon V’Yisroel Vol. 161, 5772 pages 161-165 argues that Reuvain is exempt from  paying for implants, because they do not heal  the underlying wound.  Rabbi Yoram Naaman in his Imrei Noam (#119) also rules that since that Reuvain would be exempt This author would like to question this conclusion.  When a tooth is knocked out the surrounding teeth will tend to move toward the area under vacuum and will be more likely to be lost as well.  It can be perhaps argued then, that the implant protects against this and would thus be halachically tortable in a Beis Din.

A HUSBAND FOR THE WIFE

Let’s analyze this for a moment, as to how far this obligation extends. There is a concept in halacha where the wife can say to her husband – aini nizones – v’aini osah.  I won’t be supported by you, and the money that I earn will belong to me.  However, that is only in terms of the obligation of Mezonos – sustenance, or paying for her food support.  Does the obligation of Refuah emanate from the obligation of sustenance – or is it a separate obligation of the ten obligations a husband must provide for his wife?  One of the other obligations is redemption from kidnapping.  Believe it or not, some Poskim rule that healing is not subsumed under the Mezonos obligation.  The topic is thus subject to some dispute.

Can the husband opt for dentures instead?  The short answer to this is, “no”, because he has an obligation to provide for her health care.  If he simply cannot afford it, then he would be able to provide her with dentures.  The husband cannot argue, “I told you to brush your teeth better, this is all your fault, and I am not paying for it!” If, however, she purposefully messed up her tooth – then he is, in fact, exempt (Based upon Ish v’Isha sh’Zachu Vol. I p. 348.)

What happens if the implant failed?  Are there obligations upon the periodontist?  The Tzitz Eliezer (Volume XX Siman 47) rules that if the doctor had previously informed the patient of the chances and possibilities of failure – he has no financial obligation.  Of course, it is quite another story when there is gross negligence involved.

ARE THE TEMP THINGS CONSIDERED A CHATZITZAH?

Although there is much discussion about general dental procedures and chatzitzah regarding Mikvaos, the temp tooth and screw, which may be there for three to six months or more are a bit more complicated.  However, there is a ruling by Rav Nissim Karelizt zt”l presented by Rav Asher Vistish in his She’ailas Asher (Vol. II p. 356) that states it is not a chatzitza even if it is only temporary. The rationale for the lenient ruling is partially based on the ruling of the Imrei Yosher (Vol. I #54) that when a person is adamant that the temporary item not be touched or played with or removed until the permanent situation is resolved – it is not considered a Chatzitzah.

One of the malachos of Shabbos is building.  There is a debate between Rashi and the Rambam whether a tikkun, an improvement in the body is considered Boneh.  Rashi is stringent and the Rambam is lenient.  The Mishna Brurah (330:34 and 303:26) rules like the Rambam.  Ideally, if it is a necessary emergency situation, however, it should be done by a gentile.

Often when a tooth is extracted, too much is taken out and it precludes doing an implant for a significant amount of time.  If possible, it is preferable to do it at one of the places that cn do the All-in-One procedure.