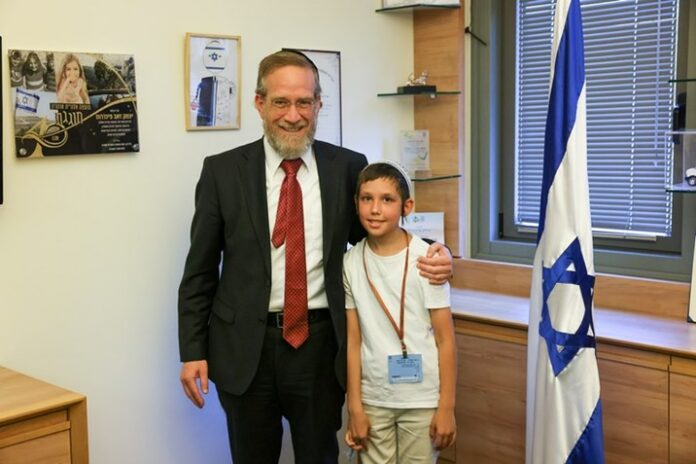 A circle was closed last week when a Ukrainian boy visited the office of UTJ MK Yitzchak Pindrus at the Knesset in Jerusalem.

The story began two and a half months ago, when a delegation of MKs visited the Aliya Center for Ukrainian refugees in Budapest, Hungary. Dovid German, 10, a Ukrainian refugee from Kharkiv who was waiting with his family to make aliyah to Israel, approached Pindrus and gave him a picture he had colored. Pindrus promised him to hang the picture in his office in the Knesset and told him: ‘When you come to Israel, I’ll invite you to my office.'”

Last week, the long-awaited moment arrived. Dovid and his family were invited to Pindrus’ office in the Knesset, where they found Dovid’s picture hanging on the wall.

“I was very moved to close a circle and meet the German family,” Pindrus said. “When I met them in Hungary about two months ago, it was shortly after they left bombed-out Kharkiv, with only the clothing on their back. Dovid gave me a drawing of a figure with a wandering basket symbolizing the wanderings his family endured. I promised I would hang the picture in my office and I would meet him in Israel in the future. I didn’t expect it to be so fast. I was happy to hear that they completed the aliyah process and wished them a quick and easy acclimatization.”