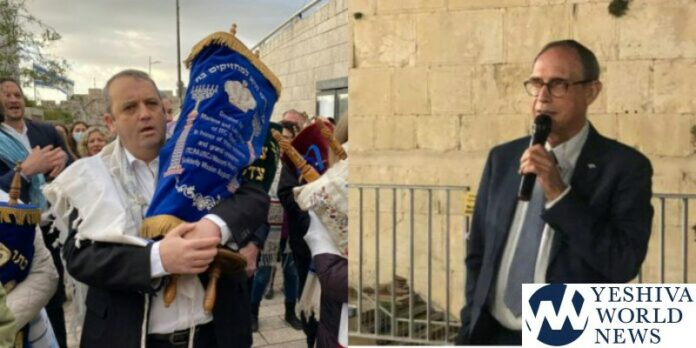 A storm of condemnation arose in Israel in the wake of an investigative Maariv report on Friday revealing that Reform MK Gilad Kariv (Labor) and Diaspora Minister Nachman Shai (Labor) engaged in shady practices in order to funnel tens of millions of shekels to Reform and Conservative groups for a “Jewish Renewal” project.

According to the report, the Diaspora Ministry, under Shai’s leadership, established a “Jewish Renewal” project, with the prior intent of funneling tens of millions of shekels to the Panim association for Reform and Conservative groups, without a tender, criteria, or oversight. The Panim association, which was previously a tiny organization with only two employees with no experience in managing a large budget, assisted in formulating the project it itself would receive several months later – with no tender! Furthermore, although the Attorney-General’s Office warned Shai that the entire initiative was legally problematic as the Diaspora Ministry is only authorized to fund projects related to the Diaspora, he chose to ignore the issues and transferred the money without receiving government approval.

The initiative began when Kariv, after entering the Knesset and his position as the chairman of the Knesset’s Law Committee, pushed for the establishment of the “Jewish Renewal” project that was specifically designed for the Panim organization – while at the same time serving as a member of Panim’s executive board, a clear conflict of interest. Kariv also lied, saying after he entered the Knesset that he’s no longer part of Panim but he actually remained a member of the board until the end of 2021, nine months after entering the Knesset.

According to Maariv, “anyone who wants to learn a lesson on how to transfer large amounts of money to whom the minister wishes to honor, and ensure that no one else will receive a shekel of this money, is invited to join the journey we’ll take in the next lines. We’ll start at the end.”

“Recently, after a year of discussions, the agreement between the Diaspora Ministry and the Panim association was officially approved. It was agreed that the Ministry and the association will work in cooperation for the benefit of ‘Jewish Renewal’ projects. The ministry will finance the activities in the amount of NIS 30 million. Why is this project davka taking place in the Diaspora Ministry? Well, there is no logical reason except the desire of Labor party members to channel the money to whoever they see fit. The Diaspora Ministry has never engaged in such projects before. The office, as its name indicates, was established to deal with matters of the Diaspora and not to run huge projects that are entirely taking place in Israel.”

“The tenders committee, led by Shai’s Director-General Tziona Koenig-Yair, was aware that this was an issue and found a solution for it. The committee discovered that 13 years ago, in May 2009, the government made a decision to transfer various activities to the Diaspora Ministry, including one called “The Society and the Diaspora.” And since no one changed this designation since then, it was no problem for the Ministry to advance a ‘societal’ initiative, even if takes place in Israel. This is like the equivalent of the Diaspora Ministry taking over all the welfare services of Israel tomorrow. In other words, the Diaspora Ministry was well aware that an initiative for Jewish Renewal needs to be carried out as part of the Culture, Education, or Religious Ministries, but they needed it in the Diaspora Ministry in order to transfer the money to whom they wanted – and only to them.”

It should be noted that unlike frum publications, Maariv, a secular newspaper, was aghast at the corruption it revealed in the report but didn’t express any concern that so much money was being funneled to a group that represents streams of Judaism that have decimated Klal Yisrael in the Diaspora due to assimilation and is now trying to make inroads within Eretz Yisrael.

Another Maariv report on Monday revealed that the Attorney-General’s Office already made it clear to the Diaspora Ministry six months ago that transferring 40 million shekels to the Jewish Renewal project is legally problematic due to the fact that societal issues are not normally addressed by the Diaspora Ministry.

Shai ignored the warning [although he did reduce the budget from NIS 40 million to NIS 30 million] and transferred the money without seeking the government’s approval!

Following the report, Noam chairman Avi Maoz wrote a letter to State Comptroller Matanyahu Engelman demanding an investigation into the matter. Shas MK Moshe Arbel appealed to Attorney-General Gali Baharav-Miara to urgently review the matter and until then, requested that she halt the funding of the project.

Rabbi Pesach Lerner, the chairman of the Eretz HaKodesh party in the World Zionist Organization, also sent an urgent appeal to the Attorney-General for an immediate freeze of the transfer of funds to the “Jewish Renewal” project in the wake of the report.

Apart from listing the many issues delineated above, Rabbi Lerner stated that since Eretz Hakodesh is a global Jewish movement that operates to strengthen Jewish identity and Jews’ connection to Israel, he was very surprised that neither his nor other such organizations were provided the opportunity to participate in the “Jewish Renewal” project.