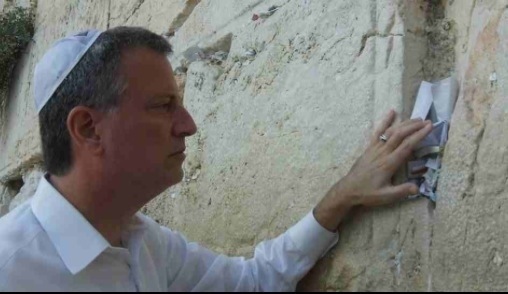 “There is a philosophical grounding to my belief in Israel and it is my belief, it is our obligation, to defend Israel, but it is also something that is elemental to being an American because there is no greater ally on earth, and that’s something we can say proudly,” Mayor de Blasio told a attendees gathered at the Hilton in Manhattan, according to an audio obtained by Capital New York.

“Part of my job description is to be a defender of Israel,” the mayor continued. “As mayor, I’m committed not just maintaining an alliance but strengthening the alliance between Israel and New York and the United States.”

Mr. de Blasio said he had visited Israel three times, most recently with his wife and son. He said he was especially moved by visiting Sderot, a decade-long target of rocket attacks from Gaza.

“We went to the children’s center in Sderot,” Mr. de Blasio said, “and we saw what it meant for everyday families. If they wanted to have time for their kids to play, they have to be in a missile-proof, bomb-proof play area, because you could not know otherwise if your children would be safe.”

“You can’t have an experience like that and not feel solidarity with the people of Israel and know that they’re on the front line of fighting against so many challenges,” he added.

The mayor concluded his remarks with an open invitation to the powerful pro-Israel organization.

““As mayor of New York City, I want you to know that you have a friend and an ally at City Hill, that City Hall will always be open to AIPAC,” he said. “When you need me to stand by you in Washington or anywhere, I will answer the call and I’ll answer it happily ’cause that’s my job.”

On the issue currently in the table, however, the mayor and AIPAC don’t seem to be on the same page, unless Mr. De Blasio had a change of heart.

In November, Mr. de Blasio hailed the Geneva deal that was reached between the P5+1 and Iran over their nuclear program, and disagreed with Senator Schumer’s push against easing sanctions on Iran.

“I have a different view on the issue. The administration is doing the right thing,” Mr. de Blasio told reporters at the time. “These negotiations are promising, and this could be the best way to stop Iran from getting nuclear weapons.”