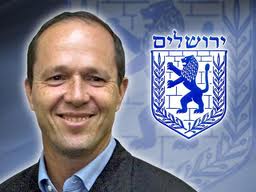 Mayor Barkat hosted leaders from Jerusalem’s religious communities for the Municipality’s annual New Year’s reception. This traditional New Year’s reception has taken place annually for over 30 years. The reception, which took place on Thursday, 22 Shevat, was attended by dozens of leaders from Muslim, Jewish and Christian communities, in addition to foreign consuls and diplomats stationed in Israel. This popular event is a testament to the success of interfaith relations and coexistence between the Municipality, Mayor Barkat and various religious leaders in Jerusalem.

Mayor Barkat remarked: “Jerusalem’s diverse constituency is a major factor in establishing the character of our city; Jerusalem is a multicultural city that is proud to maintain the freedom of religion, respect and mutual support for all residents.”

Furthermore, Mayor Barkat stated: “coexistence plays an important role in promoting Jerusalem’s success as a cultural, business and tourism hub. I would like for all residents ­­–from all faiths– to feel safe, protected and satisfied living in Jerusalem. I attach great importance to deepening the dialogue with religious leaders from all sectors in order to discuss the challenges and opportunities that exist within the city.”

Last month, Mayor Barkat visited the heads of the Christian churches to wish them a Merry Xmas and Happy New Year. This annual tradition of visiting Church leaders has expanded under Mayor Barkat and has increased dialogue between the Jerusalem Municipality and Christian leaders.

Mayor Barkat expressed his belief that “together with the Jewish, Muslim and Christian communities of Jerusalem, we fulfill Jerusalem’s destiny as a city of peace that embraces all religions and ethnicities. Together, we will continue to do all we can to preserve the unique status of Jerusalem, as a Holy City, important to billions of people around the world. As Mayor of Jerusalem, I will not allow anyone to undermine the fabric of tolerance and respect between religious groups that we have cultivated in our city.”