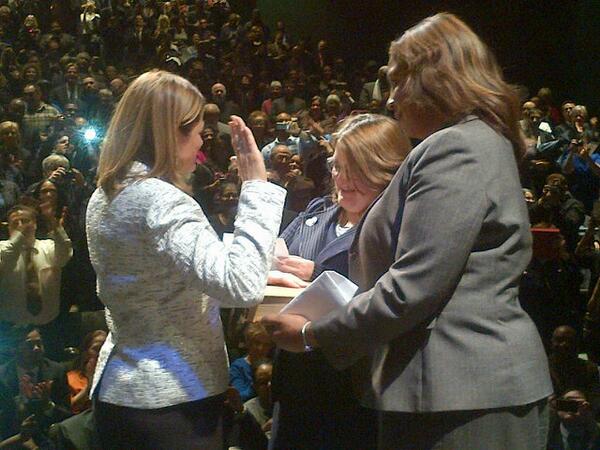 A full house and an energized crowd cheered Wednesday night the Speaker of the City Council, Melissa Mark-Viverito, at a celebratory inauguration ceremony in the Bronx.

“Today, we live in the most unequal city in the nation. But it is a new day in New York City,” Ms. Mark-Viverito said in her acceptance speech at Hostos Community College. “Now is the time to embrace our progressive moment and put our values into action.”

“I believe that the Council and our city government as a whole can do more to improve the lives of New Yorkers, everyday New Yorkers, who are increasingly feeling the great inequality crisis,” she said.

Joined by her progressive allies, Ms. Mark-Viverito vowed to take the movement forward by determination and conviction. “Let’s be clear also and make no mistake about it: There are some who are rooting for us to fail. There are some who believe that our ideas are too big, too lofty or too impatient. Some who think that by trying to raise people up, we’re trying to bring others down,” she said. “To those who have expressed or privately hold those point of view, I stress this: New York is at its best when we all work together.”

Mayor de Blasio and rows of elected officials attended the event, including Council members David Greenfield, Brad Lander and Chaim Deutsch. She was also joined by a handful of Latino lawmakers, such as Congress members José Serrano and Nydia Velázquez and ex-Bronx Borough President Freddy Ferrer, who was the Democratic Party’s first Latino nominee for mayor in 2005.

Mr. Ferrer, who seemed to enjoy every minute of the spotlight, gave a rather divisive and partisan speech, dismissing the City’s accomplishments over the past 20 years and pointing to the negative press coverage Ms. Mark-Viverito received during her campaign for speaker.

“If you shot down from another planet and read the newspapers or saw the television, you would think, ‘Oh my goodness, somebody named Che is gonna be speaker. They’re gonna put hexes on all of us. They’re gonna conspire to turn this place into something that we shouldn’t be,’” Mr. Ferrer said. “Well, what did they do? This speaker and this mayor conspired to lift the lives of families and their children by giving a little more to the people working hard and bringing home less.”

Rabbi Steve Burg, Eastern Director of the Simon Wiesenthal Center & Museums of Tolerance, was chosen by the speaker to deliver the invocation at the event.

“We have all gathered here today to anoint such a leader as the new speaker of the New York City Council. Speaker Melissa Mark-Viverito is a leader who cares about all the citizens of the great city of New York equally,” said Rabbi Burg. “Melissa cares about the Christians, Jews and Muslims and all members of the faith community. Melissa is a leader who is truly colorblind, who values men and women of every race and creed.”

“May G-d bless this great country, where a woman of Latin decent and humble origins can rise up to lead the greatest City in the world,” he concluded the prayer.

Mayor de Blasio concluded the line of speakers at the event, declaring to loud applause, “Today we celebrate the election of the most progressive speaker in the City Council in the history of New York City.”

“Some people ask what it’s going to be like to have the mayor and the speaker working so closely together, and I say it’s going to mean a lot of progressive change,” Mayor de Blasio said.