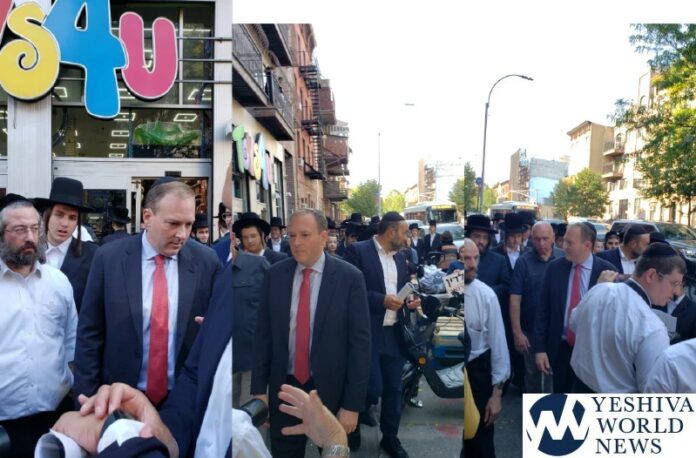 On a visit to Williamsburg on Sunday, Republican gubernatorial candidate Rep. Lee Zeldin slammed New York City and the state for its lackadaisical approach to dealing with rising antisemitic crime, and staunchly defended yeshivas in the wake of the Board of Regents’ vote on substantial equivalency standards.

On antisemitic attacks Zeldin said: “This isn’t happening once a month or even once a week. We’re getting tired of seeing this day after day after day. It’s important for all of us to have religious freedom protected, for us to be able to walked these streets, to ride a subway, without fear of being attacked.”

“It’s not just on our streets,” he continued, “but also in our schools where we are being targeted with antisemitism and raw, violent hate. The State Education Dept. was as wrong as it gets… with the vote by the Board of Regents with the vote on substantial equivalency targeting yeshivas that I have been vocally opposed to.”

“I’m here standing today against that push, and I will remain opposed to it in the future. We all need to stand up for your yeshiva education,” he continued. “The story that is not being told is that inside of yeshivas you have students who are being taught values – values of right and wrong, values of leading a good life and being law abiding and having a family and contributing positively and staying out of trouble. That story isn’t being written.”

Zeldin also touched on his own life story, and the experience of his mother, great-grandfather, and his own growing up.

Talking separately to Orthodox Jews on the streets of Williamsburg, Zeldin insisted that steps must be taken to ensure that “people who commit antisemitic attacks are being held accountable.”