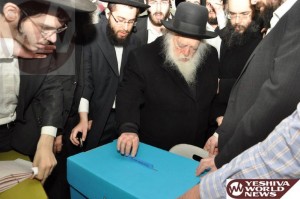 Beit Shemesh Mayor (Shas) Rabbi Moshe Abutbul is trying to remain optimistic following the Supreme Court ruling compelling a second round of municipal elections in the city. Abutbul was reelected to a second term amid accusations of widespread election fraud by members of the city’s chareidi community, albeit a small number of people but enough to place a shadow of doubt on the election outcome. He feels the decision to disqualify the election is strictly anti-chareidi and that the day will come when chareidim will be prevented from voting. He does not accept contentions that election fraud may have contributed to his victory.

The mayor and Shas officials are releasing statements of confidence that the mayor will enjoy another election victory, promising the campaign will address the issues and there will not be any mudslinging or the like. Abutbul added that while a different court ruling would have been welcome, no one is surprised but nevertheless, an effort had to be made by petitioning the high court.