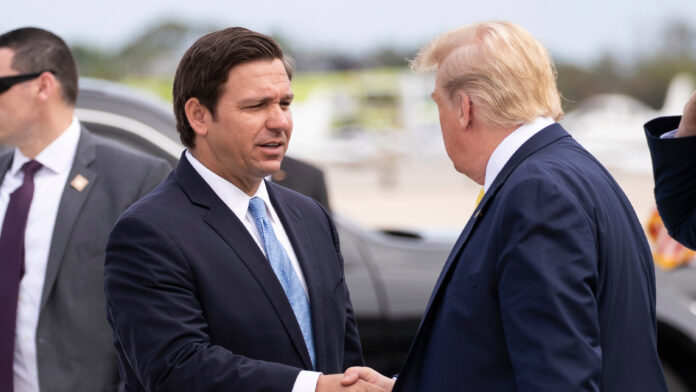 Before Trump announced his 2024 presidential run on Tuesday, he went on attacking potential GOP primary opponents, specifically Florida Gov. Ron DeSantis, who he previously called “De-Sanctimonious,” and now trolled him on Truth Social.

In a post to the Trump-run social media platform, the former president took time on Tuesday morning to troll DeSantis with a “Thank you, Ron!” attached to a photo from a 2018 DeSantis campaign ad which showed his child in a “Make America Great Again” shirt.

The tweet Trump was replying to captioned the photo “Never forget that Ron DeSantis made an ad with his baby in a MAGA onesie and called himself a “pitbull Trump defender.”

The ad, which is super cringey, also shows DeSantis “building the wall” with toy blocks and using the infamous Trump word “bigly” while leaning over the MAGA-onesied infant’s crib.

“Then Mr. Trump said, ‘You’re fired.’ I love that part,” DeSantis says in another part of the ad.