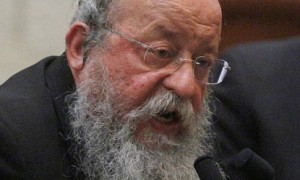 MK (Yahadut Hatorah) Rav Menachem Eliezer Moses responded to efforts by Tel Aviv City Hall to permit stores to operate on Shabbos and Yomtov, explaining the policies of the national government radiate a certain air to the local government, which is following suit.

“The government which has declared war against religion has laid the groundwork for such disparaging decisions, which we have not seen since the establishment of the state”.

Moses added that during this difficult time period he reflects back to the day when governments respected religion and our tradition. “I have a letter written by Ben-Gurion to Rabbi Yitzchak Meir Levin in which he emphasizes the Jewish state rests on three pillars; the prevention of public transportation on Shabbos, preserving Jewish family traditions in line with our heritage and maintaining kashrus in the IDF and government institutions”.

“It is amazing to see the gap between the leaders then and now as they knew the value of religion and the Torah while the leaders of today lead a morally deteriorating state and distance us from the definition of the Jewish state. While Prime Minister Netanyahu today calls on President Obama to compel the Palestinians to recognize Israel as the state of the Jewish People, he must act that his government recognize Israel as a Jewish state”.