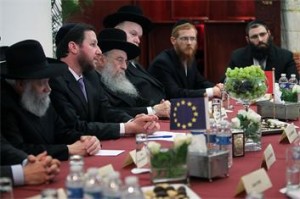 The following is via EJP:

“Great concern exists among rabbis in Europe about religious freedom of their communities in the foreseeable future,’’ says Bastiaan Belder, a member of the European Parliament from Holland.

‘’I deem their concerns completely valid concerning two essential religious rites within Judaism; circumcision and kosher slaughter. These rites are an integral part of the expression of faith within Judaism,’’ he told European Jewish Press after participating earlier this week in a two-day annual conference of the Rabbinical Center of Europe in Budapest.

Belder, who is ChrisTian, hosted Wednesday in partnership with the European Jewish Community Centre, an event to address the worrying trend of limiting Jewish religious practices in Europe,under the title “Secular Europe and Freedom of Religion: What are the Limits?”.

He mentioned that a controversial article was published in a Dutch newspaper about a proposed ban on circumcision for boys under 12 years of age brought forward by young liberals.

‘’Jewish students wrote an excellent response: in the disguise of a suggestion, the young liberal may promote a bill in which parents can only divorce if their children will not suffer any consequences from it,’’ he said.

A fierce public debate took place in Holland between 2009 and 2012 concerning a bill to ban ritual slaughter on the basis of animal welfare.

‘’Both a ban on circumcision and on ritual slaughter turn back the clock in Europe through the use of European media,’’ Belder said.

In Britain, where the British Veterinary Association President recently called for a ban on non-stunned ritual slaughter, which is contrary to Jewish religion, the government made clear that ‘’it respects the rights of the Jewish and Muslim communities to eat meal prepared in accordance with their religious beliefs.’’

‘’It is for this reason that we are retaining existing national rules governing religious slaughter shortly. The Prime Minister(David Cameron), in addressing the Knesset recently, underlined that there would be no change in the existing long standing rules,’’ wrote British MP Owen Paterson, who is the Secretary of State for Environment, Food and Rural Affairs, in response to a letter from Rabbi Menachem Margolin, Director General of the European Jewish Association, who raisedalarm about the call for ban on ritual slaugther.