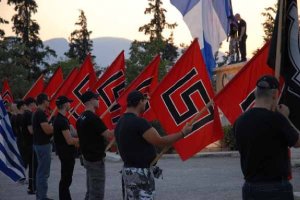 Prominent Greek-Americans are speaking out against Golden Dawn, a Greek neo-Nazi party that aims to spread its venom by winning representation in the European parliamentary elections later this month. The leaders responded to a call by the World Jewish Congress (WJC) which recently published an updated report on ‘Neo-Nazism in Modern Europe’ which highlights the dangers of Golden Dawn and similar movements on the continent.

“We thank these Greek American leaders for their strong stand against Golden Dawn, which is little known in America but a looming problem in Greece,” said World Jewish Congress President Ronald S. Lauder. “We hope their words will influence Greek citizens to reject this hateful, extremist party.”

Golden Dawn’s current popularity in opinion polls means that it could elect at least one member to the European Parliament on 25 May. A virulently anti-Semitic, racist, and anti-immigrant party, the party won 18 seats in the 300-member Hellenic Parliament in 2012 in the wake of Greece’s Eurozone austerity crisis.

It is currently the country’s fourth-largest political force, despite the fact that some of its leaders are in jail facing charges that they formed a criminal organization to sow terror and violence in the country.

Golden Dawn maintains chapters in several centers of the Greek Diaspora, including in Italy, Australia and New York City. The World Jewish Congress has urged the Greek government to crack down on the party and enact laws against hate speech.