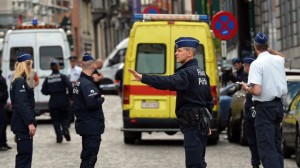 The Israeli couple from the Tel Aviv area murdered in the terrorist attack in the Jewish Museum in Belgium on Shabbos has been identified as Emanuel (54) and Miriam (53) Riva HY”D. Arrangements are being made to fly their bodies to Israel for burial. The couple is survived by two daughters, 15 and 16-years-old.

The condition of the wounded person remains critical according to reports from Belgium. The identity of the third fatality in the attack has not yet been released.